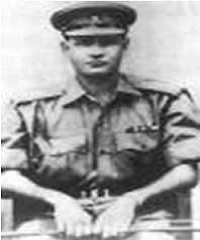 Lieutenant Colonel Harbans Lal Mehta hailed from Delhi and was born on 15th September 1922. Son of Shri D C Mehta, Lt Col HL Mehta completed his education in DAV College and joined the Army on 15th December, 1946 at the age of 24 years. He was commissioned into 4 Madras of the Madras Regiment, an Infantry Regiment with a rich history of bravery and numerous battle exploits. By the year 1965, he had been promoted to the rank of Lt Col and had taken over as the ‘Commanding Officer’ of 4 Madras battalion.

During 1965, Lt Col Harbans Lal Mehta was serving as ‘Commanding Officer’ of 4 Madras battalion. As the war clouds were gathering in 1965, 4 Madras got deployed in the western sector. On 08 Sep 1965, Lt Col Mehta’s unit was tasked to capture Maharajke in Sialkot Sector as part of ongoing operations. The troops under the leadership of Lt Col Mehta crossed the cease fire line (CFL) on 08 Sep 1965 at around 0200 hrs. However their advance was thwarted by strong enemy defenses. Analyzing the situation, Lt Col Mehta then ordered his officers to clear the objective trench by trench. In the fierce fight that followed, many enemy trenches were cleared, guns were destroyed and heavy causalities were inflicted on the enemy. However the enemy refused to surrender and the day light was approaching.

Also Lt Col Mehta found that one of his reserve companies was held up by unforeseen opposition from a flank. As the time was running out,  Lt Col Mehta disregarding his personal safety, went forward and personally led the assault. Inspired by his presence in the forefront of the assault, Lt Col Mehta’s men pressed on the attack, which resulted in the collapse of the enemy’s stronghold. However during the heavy exchange of fire, Lt Col Mehta got hit by bullets and was seriously injured. He later succumbed to his injuries and was martyred. Lt Col Mehta was a valiant soldier and a gritty ‘Commanding Officer’ who led from the front like a fine military leader. Lt Col Harbans Lal Mehta was given the nation’s second highest gallantry award, ” Maha Vir Chakra” for his outstanding bravery, leadership, camaraderie and supreme sacrifice.

On 8 September 1965, Lieutenant Colonel H.L. Mehta, while commanding a battalion in the attack on the Sialkot Sector, found that one of his companies was held up by heavy Pakistani machine gun, mortar, rifle and automatic fire. The enemy defences were sited in cane fields and visibility was poor. Seeing the delay in the attack, Lieutenant Colonel Mehta deployed one of his reserve companies to deal with the enemy’s machine gun, but this company was also held up by unforeseen opposition from the flank. Disregarding personal safety, Lieutenant Colonel Mehta went forward and personally led the assault. Inspired by his presence in the foremost line of assault, his men pressed home the attack, which resulted in the collapse of the enemy’s stronghold.

In this action, Lieutenant Colonel Mehta was fatally wounded. His example of personal courage, leadership and sacrifice were in the highest traditions of the Army.