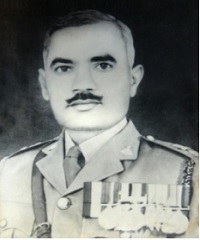 Lt Col Girdhari Singh VrC, MC (Bar) hailed from Badraula village of Faridabad district in  Haryana. He was married to Godhari Devi and the couple had two sons and three daughters. One of his son also served in the Army as 2nd Lt  in the same 4 Rajput Regiment and got martyred in 1962, Indo-China War.

Lt Col Girdhari Singh was commissioned in the British Indian Army (4 Rajput Regiment).  He got the double gallantry medal on the successful leadership of the river Gari in Italy. The English officers called him as “Tiger of Italy and Gari river”.  Colonel Girdhari Singh  always conquered the military fronts with courage and intelligence. He had an intuitive knowledge of guerrilla warfare style.  Taking risk was his  nature and was never afraid of death. Colonel Girdhari Singh was also involved in the training of the officers in Military Academy at Dehradun where he used to teach war tactics to the officers.

From December 1947 to March 1948 Colonel Girdhari Singh  was commanding a battalion which was stationed in the Chhamb sector. The enemy attacked several times to capture the area. Although proper security resources were not available in that remote place,  Girdhari Singh motivated the battalion jawans in his efficient leadership style and with intelligent planning attacked the enemy and defeated the enemy very badly.

On the night of 26th February 1948 Colonel Girdhari Singh himself attacked the enemy along with his two companies. Intense firing ensued which resulted in enemy soldiers being killed in large number and the rest escaped from the battle area to save their lives. What remained in the battle field were the bodies of 30 dead soldiers of the enemy and large number of horses and mules. The Government of India being pleased with the bravery, determination and skillful leadership of the brave officer honoured him with Vir Chakra.

In October 1948 Colonel Girdhari Singh’s battalion reached the Kashmir Valley. There, at Jozila pass, a fierce battle was raging with Pakistan. His battalion  received orders from 77 Para Brigade to actively participate in this war. The Jozila pass is located at a height 11370 feet which is always covered with snow and is very remote. The earlier Indian army battalions  stationed in that sector were unable to capture the remote hill. The strength of the enemy was increasingly growing and they were consolidating their position. In such odd circumstances Colonel Girdhari Singh received an order to attack the  invincible hill and capture it.

On the night of 15-16 November 1948, blizzard and terrible storm was sweeping that area. No ordinary man could even think of coming out of their house in such condition but Colonel Girdhari Singh in his indomitable spirit filled every soldier of his battalion extreme sense patriotism and attacked the  hill in that dark night in a planned manner with battle cry ‘Jai Bajrang Bali”. He captured Drass first and then went on to capture the invincible hills of Jozila. This win could only be possible due to his sheer dedication, fearlessness and skillful leadership. The Government of India has allowed that day to be celebrated by  his battalion as ‘Yudh Samman Diwas’  and even today 15-16 November  is celebrated as  ‘Jozila Day ‘ every year with great joy.

Colonel Girdhari Singh retired as a full colonel in 1961.  After retirement Colonel Girdhari Singh worked as Chief Security Officer and led a very active life. He lived a long and happy life till his death. He breathed his last in 1976 due to cardiac arrest at his  farmhouse in Badraula village.

Colonel Girdhari Singh is survived by his Children and grand children.

The citation for the VrC  awarded to him reads :

From December 1947 to March 1948, Lieutenant Colonel Girdhari Singh was commanding a unit at Chhamb, which was in an isolated position and situated very close to the Pakistan border. The enemy made all out efforts to capture this position, but Lieutenant Colonel Girdhari Singh, in spite of inadequate defence stores and supporting arms, gave the enemy hard knocks every time they tried to be aggressive

On the night of 26 February 1948, this officer personally led two company patrols as far forward as Chor Dhakki. The enemy, owing to the boldness of this action, was completely surprised and left behind 30 dead and a good number of horses and mules. This success would not have been possible but for this officer’s personal bravery when in close contact with the enemy and his coolness under fire.