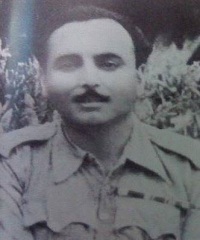 Lieutenant Colonel Dewan Ranjit Rai was born in Gujranwala in present day Pakistan on 6th February 1913. He completed his schooling from Bishop Cotton School at Shimla and later attended the first course at the prestigious Indian Military Academy, Dehra Dun. He was commissioned on 1st February 1935 at the age of 22 years and was attached to British Army regiment for a year. Subsequently he was posted to the 5th battalion of 11 Sikh Regiment on the 24 February 1936. By 1944, he had been promoted to the rank of acting Major. Later in the year 1947, he was selected for posting as Military Attaché to USA but as the Indo-Pak war broke out, he was selected to lead a mission to Kashmir.

During Oct 1947, Lt Col Dewan Ranjit Rai was commanding the 1st battalion of Sikh Regiment in Gurgaon and was busy making arrangements for the refugees, when Kashmir was invaded by Pakistan. On 27 October 1947, Lt Col Ranjit Rai along with his C and D companies took off in IAF Dakotas from Delhi on a mission to save the town of Srinagar and it’s airfield from falling into the hands of Tribal Lashkars. This invasion of J and K was under the overall command of Maj Gen Akbar Khan of Pak army and had been code named, ‘General Tariq.’  Lt Col Ranjit Rai and his two companies landed at Srinagar at 9.30 am on 27 Oct and swung into action after initial assessment of the situation.

Lt Col Ranjit Rai dispatched C company under Capt Kamaljit Singh to Baramulla to defend that town.  D company under Maj Harwant Singh was sent to Srinagar to carry out a flag march to restore order and confidence amongst the population. He himself decided to stay on at the airfield and await the arrival of his remaining two companies and take them to Baramulla. Capt Capt Kamaljit on approaching Baramulla, realized that it had fallen to the invaders and decided to take up defences at Mile 32; a few miles short of Baramulla. Maj Harwant Singh after the flag march in Srinagar, left one platoon for the protection of the bridge over Jhelum at Sopore ( 7 miles East of Srinagar ) and another platoon for the defence of the airfield. He along with one platoon then joined C Company at mile 32 at 4.30am on 28 Oct. The total strength of about 140 to 150 men at Mile 32 was still too less to face thousands of invaders.

Lt Col Ranjit Rai  had no communications with his troops because the aircraft carrying the communication equipment had developed a snag and had en-route force landed at Jammu. When his two other companies did not arrive on the morning of Oct 28, he decided to move forward and join his troops at Mile 32 leaving instructions with the adjutant that as soon as the remaining two companies land these be sent forward without delay. Around 11.30 AM, the enemy, a few thousand invaders supported by heavy machine guns and 3 inch mortars attacked the position at Mile 32. This attack was successfully repulsed and when the enemy realized that that it could not dislodge Lt Col Ranjit Rai and his men, it decided to outflank them with a view to cut them off from the rear.

When the remaining two companies did not arrive and the situation at Mile 32 became untenable, Lt Col Ranjit Rai decided to withdraw his troops from Mile 32. However by then the withdrawal route was nearly cut off by the enemy. It was during this very difficult task of extricating his troops from the enemy cordon that Lt Col Ranjit Rai fell to an enemy bullet. Lt Col Ranjit Rai was gallant soldier and a fine officer who led from the front and proved to be an inspirational commanding officer. He was given the nation’s second highest gallantry award, “Maha Vir Chakra” for his outstanding leadership, fighting spirit and supreme sacrifice. He became independent India’s first officer to receive the Maha Vir Chakra (posthumously).

The citation of Maha Vir Chakra awarded to him reads:

Lieutenant Colonel Dewan Ranjit Rai was the Commanding Officer of 1 Sikh. Immediately on landing at Srinagar, on 27 October 1947, he appreciated that it was imperative to hold and oppose the raiders as far away as possible from the vital city of Srinagar and its adjacent airfield. As very little time was at his disposal, he personally conducted reconnaissance and operations at such personal risk that he was eventually killed. By his complete disregard of personal danger and his determined and inspired leadership, the raiders were stopped sufficiently far away to enable a build-up for the eventual decisive defeat.

The officer gave his life in a successful endeavour to save Srinagar by displaying courage of the highest order.