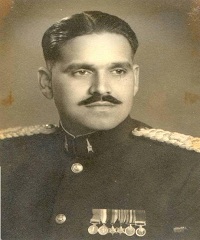 Place of Birth : Farukkhabad, UP

Lt Col Bramhanand Avasthy was born in Farukkhabad district of Uttar Pradesh. He was commissioned into 2 Rajput of the famed Rajput Regiment, an infantry Regiment known for its intrepid soldiers and numerous battle exploits. However he commanded 4 Rajput battalion during the Indo-China war in 1962 and fought one of the heroic battles at Lagyala Gompa monastery overlooking the Morshing Valley.

Lt Col Bramhanand Avasthy got married to Ms. Sushila, the daughter of Shri Pandit Sita Charan Dube and Smt Laxmibai Dube and the couple had two daughters Neeharika and Aradhana.

The Indo-China war had reached it’s peak, when 4th Rajput battalion was sent to NEFA from Belgaum. At that time Major Trilok Nath was officiating as CO and was told that it was assigned to 65th Brigade under Brigadier GM Saeed. The battalion was assigned to capture left flank of the Division covering the approach from Orka La-Punsum la however the “C” Company of the battalion was made responsible to protect the headquarter of 4th Infantry Division. Soon Lt Col Brahmanand Avasthy, who was serving as an Instructor in the Infantry School at Mhow was chosen to take over as Commanding Officer of the battalion as he was considered to be one of the finest infantry officers among his peers.

The 65 Brigade besides 4 Rajput had battalions of 1st Sikh, 2nd Sikh and 4th Sikh Light Infantry Regiment. When patrolling soldiers of 1 Sikh LI observed some suspicious movements from the other side,  a patrol party consisting soldiers from these 3 Sikh LI battalions totaling 200 soldiers were sent out. The patrolling team crossed the Luguthana-Kya La line and planned to climb the nearest highest peak to observe the area carefully. As it had become dark they decided to make a defensive post there and planned to move the next morning. However the Indian patrolling parties were being tracked by the Chinese forces and they waited for the opportune moment to ambush the Indian soldiers. The Chinese forces attacked the Sikh LI soldiers and 63 of them perished in the attack, which  stunned the Brigade HQ.

However the aggressive patrolling continued and another patrol of 4 Rajput under Naib Subedar Man Singh encountered the Chinese in the Jalak Pu area. Subsequently a decision was taken to withdraw from Sela. With 62 Infantry Brigade falling back from Sela, Lt Col Awasthy decided to defend Bridge 1 to allow the brigade and remnants from 4th Division to retreat. However 62 Inf Brigade never returned and the remaining soldiers filtered through some other routes. Finally Lt Col Avasthy pulled back to Lubrang destroying any stores that could not be carried back. From there he moved to Phudung joined by various stragglers, many of them wounded and had to be carried. Lt Col Avasthy himself carried the medic who was snow blinded. When this force reached Priyadung, they saw that the track bifurcated with one side climbed towards an old monastery Lagyala Gompa and the other followed a stream towards Morshing. Lt Col Avasthy decided to take the route to Lagyala Gompa.

Lagyala Gompa, one of the holiest Buddhist shrines in Arunachal Pradesh was located on a high feature overlooking the Morshing Valley as well as the route Lt Col Avasthy was taking. There was a plateau just before it made its steep climb to the monastery making it an ideal place for ambush. The movement of Lt Col Avasthy’s troops was being tracked by the enemy forces and a 500 strong Chinese unit had already moved in behind with one group was waiting in ambush at Lagyala Gompa. As Lt Col Avasthy and his troops approached the Gompa they came under heavy fire from the Chinese. Lt Col Avasthy and his men could have probably chosen to fall back and look for another way around but decided to fight the Chinese. Although lacking heavy firepower Lt Col Avasthy launched a 2 pronged counter attack. The battle was fierce and the Chinese annoyed by the casualties they were taking, tried to isolate Lt Col Avasthy and cut him off. But Lt Col Avasthy’s men surrounded their valiant Commanding Officer and fought to the bitter end. Finally it came down to hand to hand combat however after few hours of fierce fighting the Chinese prevailed. Lt Col Avasthy and all his gallant soldiers were martyred and the battlefield was littered with the bodies of 126 Indian soldiers and over 200 Chinese soldiers. A shepherd boy who later became the Head Lama of the monastery was the only witness to this heroic episode. The Chinese dug a mass grave for the Indians and left a flattened ration tin with the names of the officers. After the ceasefire the bodies were retrieved and Lt Col Avasthy’s body was found with a blood soaked letter to his wife.

Lt Col Bramhanand Avasthy was a committed soldier and an officer par excellence who led his troops from the front like a true military leader. His wife, Smt Sushila Avasthy’s lone wish was that her ashes should be scattered around the memorial at Lagyala, where her husband had laid down his life. Smt Sushila Awasthi died in 2011 and the men of 4th Rajput carried out her wishes, 49 years after her husband was martyred on that isolated hillside.

Tribute by his daughter Mrs Neeharika Avasthy Naidu in 2020 :

Every year the 24th of April arrives and I think, I am getting older as some memories tend to fade away but this one memory never seems to leave my head and heart…..My papa’s birthday. I don’t even know how old he would have been. To the question “which year was he born”, I have no answer. To me and my sister Bela, he came from all times and will live for all times. He has filled our lives even to this day.

He left us on 23rd of October 1962, to face the enemy and to this day he is still somewhere…walking the mountains, in his Olive Green cotton shirt and military shoes. Maybe his comrades in arms also wonder with him, sharing the agony of lost souls. Who knows. I believe in souls and reaching out to those who have gone. And I know, he is there, somewhere, protecting us unbeknownst to us. We never feel abandoned. He and my mummy have given us backbones of steel. Bela, my younger sibling, and I will never be alone. We know that.

We both remember our little home in Mhow, where we owned a little kitchen-set of aluminum …little kadhais, little pans and pots. It was the most exciting possession, of 2 little girls. Sunday mornings were spent making one potato ki sabji and little pooris with our Papa, that was regally served for breakfast. He had made a choolha with bricks and burnt coal, over which our royal feast was prepared and to this day nothing tasted better. I remember his beautiful strong hands making little pooris and serving us with the love, only a great, devoted, loving papa could give.

Mercifully, there were no TVs, no mobiles, so we have vivid and colourful memories..maybe only of a few years…not enough to last me 60 years of my life, even beyond the day he left.

Papa, we remember you. I know you see us. I know you protect us and our families, your friends and your Regiment, the gallant Rajput Regiment……We are not alone as my Papa, Lt Col Bramhanand Avasthy(24 Apr to forever) is there with us forever…..