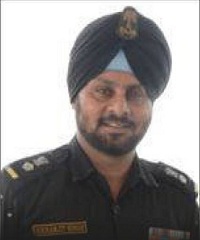 Lt Col Bikramjeet Singh hailed from Chandigarh in Punjab. Son of an army veteran Maj Paramjit Singh and Smt Luvpreet Kaur, Lt Col Bikramjeet completed his graduation from MLN College, Ambala.  Lt Col Bikramjeet always had an inclination to join the armed forces right from his childhood. Consequently following into his father’s footsteps, Lt Col Bikramjeet joined the Indian Military Academy after passing the Command Defence service examination. He passed out in the year 1998 from IMA and was commissioned into 16 cavalry of the Armoured Corps, one of the elite combat arms of the Indian army.

By the year 2013, Lt Col Bikramjeet Singh had put in around 14 years of service and had worked in various operational areas. After serving for a couple of years Lt Col Bikramjeet got married to Ms. Navneet Kaur and the couple had a daughter Ramneet.

During  September 2013, Lt Col Bikramjeet’s unit was deployed in Samba district of the trouble-torn J&K. On 26 Sep 2016, the Officers’ Mess Complex of his unit was attacked by a group of heavily armed terrorists.  At around 7.10 am, Lt Col Bikramjit Singh on hearing the sound of weapons near the Officers’ Mess Complex, rushed to the site. He spotted terrorist hiding in a nullah, firing and attempting to move towards the adjacent family accommodation. Despite the presence of many armed terrorists, Lt Col Bikramjeet moved from one position to another, shouting instructions and directing the action.  His prompt and fearless action dislodged the terrorist from an effective firing position, forcing the terrorist to seek cover in a room, leading to his eventual elimination.

Lt Col Bikramjeet by his courageous and prompt action prevented the terrorists from going towards Officers’ Married Accommodation Complex. However, while moving from one position to another, he exposed himself and received gunshots in his stomach. He later succumbed to his injuries and was martyred. Lt Col Bikramjeet displayed exemplary courage and leadership during the operation and saved many precious lives of his fellow soldiers and their families. Lt Col Bikramjit was a valiant soldier and a gritty officer who displayed a very high order of devotion to duty when the situation demanded. Lt Col Bikramjit was given the gallantry award  ” Shaurya Chakra”. for his outstanding bravery leadership and supreme sacrifice.

The YPS Chowk at Mohali in Chandigarh has been named after Lt Col Bikramjit Singh in his honour.