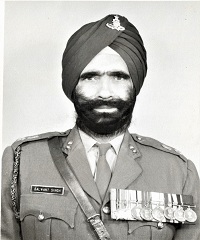 Regt: The Regiment of Artillery

Lt Col Balwant Singh was born on 4th Sep 1928 in Paninguan village (Now in Haryana). He was the younger of two sons of Dr. Bakhtawar Singh, who hailed from Gharuan village in Ropar district of Punjab. His father being a Doctor with Punjab Govt, held a transferable job and Lt Col Balwant thus studied and grew up at various places like Shimla, Delhi, Panjnad (Multan), Panipat, and other places in undivided Punjab, before finally graduating from DAV College Jallandhar.  After his graduation, he joined the Army and was commissioned into 16 Field Regt on 9th July 1949, from Officers Training School, Kamptee.

After commissioning into 16 Field Regiment, Lt Col Balwant Singh also served with various Artillery Regiments including 78 Field Battery (Border Scouts), 11 Field Regiment (ZOJILA), 32 Heavy Mortar Regiment and 8 Field Regiment besides a tenure in Artillery Centre Hyderabad. He graduated from the prestigious Defence Services Staff College, Wellington as part of the 17th Staff Course in 1963, and subsequently held the appointment of DAQMG of 27 Mountain Division, in Kalimpong and was later posted as Second-in-Command of 16 Field Regiment, before finally assuming Command of 86 Light Regiment (Pack/Towed) in June 1968.

COMMANDING OFFICER IN THE 1971 INDO-PAK WAR

During the 1971 War Lt Col Balwant Singh was the Commanding Officer of 86 Light Regiment (Pack/Towed) deployed on the western sector.  The unit was deployed in Chhamb-Jaurian & Sunderbani Sectors providing fire support to 28 Infantry Brigade of 10 Infantry Division. The unit under his Command provided very effective fire support in the Battle of Chhamb. The devastating bombardment by the Regiment on 3rd and 4th December 1971, helped beat back the Pak Army attack on Picquet 707. Similarly, very effective and accurate shelling by the unit on 6th and 7th December 1971 stalled the Pak Army attack on Laleali. For its outstanding role in the 1971 War, 86 Light Regiment was awarded two Battle Honours of Laleali and Picquet 707. It was the only Light Regiment to be bestowed two Battle Honours and for this exceptional feat, the Regiment was subsequently selected to be the first unit of the Indian Army to be equipped with BRAHMOS Missiles. Post the 1971 War Lt Col Balwant Singh served as GSO-1 of 2 Corps Artillery Brigade and finally held the appointment of Group Commander NCC in Asansol (WB) before retirement.

Lt Col Balwant Singh superannuated on 30 Sep 1978 and subsequently took re-employment in the Army before finally retiring on 3rd Sep 1984. Post-retirement he settled down in Sector 36-C Chandigarh, where he spent the next 26 years leading a quiet but active retired life avidly playing his two favourite games Bridge & Golf, and was a familiar face in the Chandigarh Golf Club. He and his wife Mrs Bhagwant Kaur, celebrated their 50th Wedding Anniversary on 21st Dec 2008. The Couple had two Sons both of whom joined the Army and also got married into Army Families. Lt Col Balwant Singh after leading a fulfilling 82 years of life, breathed his last on 27th July 2010 at Chandigarh. Lt Col Balwant Singh is survived by his two sons Major General Birender Singh Dhanoa, (Armd Corps) and Colonel Jaswinder Singh Dhanoa, (Artillery).