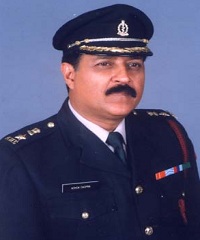 Lt Col Ashok Chopra was born on 23rd August 1950 into a military family. Son of Shri Kasturi Lal Chopra and Smt Champa Wati Chopra, he had a brother Pawan as his sibling. He always excelled in studies and was a bright student. Besides being good in studies he had a passion for the art fields specially music. He was a fabulous singer and was the winner of his school singing competitions from the 6th to the 12th class every year. He always led the music choir of his school and gained fame for his singing talent.

After completing his Class XII, he got selected for the prestigious  Armed Forces Medical College(AFMC) and completed his MBBS and went on to become a surgeon. Following into the footsteps of his father he joined the army in 1974 at the age of 24 years.  After serving for few years, he got married to Dr Madhu a fellow Army doctor and the couple had a daughter Priyanka and son Siddharth.  While in service, he served in various Army medical establishments and developed into a committed soldier and professionally competent surgeon.  By the year 1997, he had put in over two decades of service in the Army and had been promoted to the rank of Lieutenant Colonel. He retired from the Army in the year 1997 and thereafter opened three hospitals in Bareilly called “Kasturi Hospitals” named after his father.

The “Kasturi Hospitals” were very successful and Lt Col Chopra proved his mettle as a competent doctor. Besides being an acclaimed doctor, Lt Col Chopra was an accomplished singer and had a great fan following who appreciated his singing. He organized many music programs for the Army Wives Welfare Association (AWWA) which were a big success. He once organized a program in Ladakh which was supposed to be just for a day but went on for a week due to popular demand from his audience, the army Jawans. He also performed for many programs in Delhi with the famous orchestra, “Bullets” and “Friends” which too were a huge success. Lt Col Chopra always loved to perform for army Jawans, who were serving the nation in remote areas.

Lt Col Ashok Chopra also performed in solo programs for Naatia Kalam (Muslim religious songs), Gurbani and Bhajan Kirtans.  After witnessing his performance at the Dargah Shareef in Bareilly in front of 3,00,000 people in 1993, T-Series was enthused to release a cassette and a CD named “Kalame Ala Hazrat” with him, which was a great success. T-Series also released another CD of his bhajans called “Har Har Shankar” which too was very well appreciated.  Lt Col Ashok Chopra in addition to being a good doctor and singer was a socially concerned citizen too. He looked for every opportunity to use his talent to raise funds for social causes.  He gave a live concert for a large audience at ISKON, Juhu in aid of an old age home being built at Karjat.

Lt Col Ashok Chopra with a string of accomplishments lived a contended life and left for his heavenly abode on 10 June 2013 at the age of 63 years. Lt Col Ashok Chopra is survived by his wife Dr Madhu Chopra, daughter Priyanka Chopra who is a leading actress, son Siddharth Chopra and brother Shri Pawan Chopra.

A road in Andheri in Mumbai has been named as “Lieutenant Colonel(Dr) Ashok Chopra Marg” in his honour.