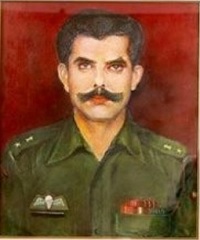 Lieutenant Colonel Arun Kumar Chhabra was commissioned into the Parachute Regiment and later joined the 10 Para(SF), the elite battalion of the Regiment. Raised on 01 June 1967, 10 Para(SF) are known as “Desert Scorpions” as officers and jawans of this unit are trained specially for desert warfare. They are the men of steel, whose physical and mental toughness is beyond compare as donning maroon beret and “Balidan” badge, they are always ready to take on any task anywhere.

Within 4 years of its raising, 10 Para(SF) took part in 1971 war and conducted one of the most successful commando operations in the world- The Chachro Raid. This operation is a case study in the US Special Forces and UK Special Forces -SAS. Winner of various gallantry awards 10 Para(SF) soldiers are known for their ruthless and daredevil operations in most challenging situations. They are trained to use all kinds of weapons—machine guns, sniper rifles, grenade launchers and guided missiles—to make their mission a success.  Armed with exclusive weaponry, they have the capability to come through land, sea or air, so as to quickly engage an unsuspecting enemy, deliver a solid punch and disperse within moments. Lt Col Arun Kumar Chhabra took part in numerous daredevil operations during his service career and by the year 1987, had evolved into a battle hardened soldier and an inspiring leader for his troops.

After the induction of Indian forces in Aug 1987 in Sri Lanka, as part of Indo-Sri Lankan accord, the militants were supposed to surrender but the dreaded LTTE backed out and unleashed war on Indian forces. Initially only 54 division of the Army was inducted but the escalation of the operations brought three more divisions 3, 4 and 57 into the conflict. The IPKF launched its first operation on 9 October 1987 after formulating a multi-pronged strategy to take on LTTE. Code-named Operation Op Pawan, it was expected to neutralize LTTE operational capability in and around Jaffna. This included the capture or neutralization of the LTTE’s chain of command, which was expected to leave the rebel movement directionless in the face of the impending assault on the LTTE strongholds by the IPKF. Lt Col Arun Kumar Chhabra’s unit 10 Para(SF) was inducted into Sri Lanka as part of IPKF and got involved in the operations right after its induction.

During 1989, Lt Col Arun Kumar Chhabra, a recipient of the Sena Medal  was serving as second-in-command of 10 Para (SF), and soon was to take over as its commanding officer. In 1987, 10 Para(SF) had got involved in the  Jaffna University Heli-drop operation launched by the IPKF aimed at disarming the LTTE by force and capturing the town of  Jaffna. Mounted on the midnight of 12 October 1987, the operation was planned as a fast heliborne assault using Mi-8 helicopters with 10 Par(SF) commandos and a contingent of the 13 Sikh LI. The aim of the operation was to capture the LTTE leadership at the University building which served as the Tactical Headquarters of the LTTE. Though the operation proved costly for the Indian forces, it changed the course of the war with LTTE.

A Son’s Tribute to his Father:

When  Lt Col Arun Kumar Chhabra was martyred in 1989, his son Varun was 9 years old. At that time he was second in command of the unit and was to take over the command of the unit shortly. His dream of commanding the unit could not be fulfilled as destiny had something else in store for him. His son Varun took a vow to fulfill his father’s dream of commanding the prestigious battalion. Varun grew up and joined the Army and was commissioned into the Regiment of his father. Later Varun as Col Varun Chhabra took over the command of the elite 10 Para(SF), thus paying tribute to his father and fulfilling his dream.