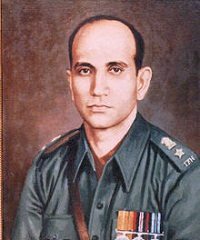 Lieutenant Colonel Ardeshir Burzorji Tarapore was born on 18 Aug 1923 in Mumbai. Lt Col Tarapore belonged to a the family of a great warrior, Ratanjiba who served in the army of Shivaji. Ratanjiba was given the charge of one hundred villages as an acknowledgement of his gallantry, loyalty and services. One of the villages was named Tarapore and since then it became the title of the family. Lt Col Tarapore’s father Burzorji worked with the Customs Department of the erstwhile Hyderabad State and was an erudite scholar of Persian as well as Urdu.

Lt Col Tarapore was the second of three children, with an older sister and a younger brother. At the age of seven, Lt Col Tarapore who was lovingly called Adi joined the Sardar Dastur Boys Boarding School, Pune and completed his matriculation in 1940. Though he was not an exceptional student academically, he was a gifted sportsperson and distinguished himself in athletics, boxing, swimming, tennis, and cricket. After his matriculation, Adi was commissioned in the Hyderabad State Army and joined the Officers’ Training School at Golconda. On 01 Jan 1942, he was commissioned into 7th Hyderabad Infantry, but he wanted to serve in an armoured regiment.

An opportunity to realize his dream came his way when his battalion was being inspected by Maj Gen EI-Edroos, the Commander-in-Chief of the State Forces. Adi’s company was carrying out routine training at that time, at the grenade throwing range. One of the Sepoys, a fresh entrant, momentarily panicked and failed to lob the grenade correctly, resulting in the grenade falling into the throwing bay. The young Lieutenant Adi immediately jumped into the throwing bay and picking up the grenade, threw it away to safety. However, the grenade burst as it left his hand, and he was injured in his chest. Maj Gen EI-Edroos who was present there was deeply impressed and personally congratulated him for his courage and presence of mind. Adi availed this opportunity to request him for a transfer to the armoured regiment of the State Forces. Gen EI-Edroos accepted his request and he was transferred to the 1st Hyderabad Imperial Service Lancers.

During World War ll, he along with other soldiers were sent to the Middle East on posting. He was shifted to the Poona Horse on 01 Apr 1951, when the Hyderabad State was integrated with the Union of India. He got his promotions and eventually became the Commanding Officer, commanding his own regiment in the 1965 war against Pakistan. Lt Col Tarapore got married to Perin and the couple had a son, Xerxes and daughter Zarine. Besides being an officer par excellence, Lt Col Tarapore was a family man and a good human being.

After Pakistan launched their “Operation Gibraltar”, the war with Pakistan was declared on 27 Aug 1956.  As part of the retaliatory action plan, the Army chalked out a strategy to capture Chawinda and Phillora in Sialkot sector. The area of Chawinda was occupied by two regiments of Pakistani armour and infantry. On 11 Sep, 17 Horse under the command of Lt Col Tarapore planned a surprise attack on Phillora from the rear. As the regiment was moving forward between Phillora and Chawinda , it was counter attacked by enemy armour from Wazirali. Lt Col Tarapore held his ground and gallantly attacked Phillora with one of his squadrons and supported by an Infantry battalion.  An intense battle was fought between two sides which resulted in the destruction of 13 tanks. Pakistani left Chawinda and Phillora was captured. Lt Col Tarapore fought brilliantly but was seriously injured in the battle.  However, undeterred he planned attacks to capture Wazirali, Jasoran and Butur-Dograndi.

On 13/14 Sep 1965, Lt Col Tarapore though still wounded launched an infantry attack accompanied by 17 Horse and 9 Garhwal battalion. Wazirali was captured on 14 Sep but Lt Col Tarapore pressed on with his attack on enemy forces hiding in the areas of Butur and Dograndi. Once again in a daring attack Lt Col Tarapore destroyed six enemy tanks and captured Jassoran along with 9 Dogra Bn and Butur & Dograndi along with 8 Garhwal Rifles by 16 Sep. Though his own tank was hit several times, he maintained his pivots at both these places, supporting the infantry attacking Chawinda from the rear. Inspired by his leadership, the regiment attacked the enemy armour and destroyed approximately sixty Pakistani Army tanks, suffering only nine tank casualties. However, when Lt Col Tarapore was posing a stiff challenge an enemy shell set his tank ablaze engulfing him in flames. Lt Col Tarapore was martyred in the battle field leading from the front like a true military leader.

Lt Col A B Tarapore was given the nation’s highest gallantry award, “Param Vir Chakra” for his outstanding courage, leadership, indomitable spirit and supreme sacrifice.

On 11 September 1965, the Poona Horse Regiment under the command of Lieutenant Colonel Ardeshir Burzarji Tarapore was assigned the task of delivering the main armored thrust for capturing Phillora in the Sialkot Sector in Pakistan. As a preliminary to making a surprise attack on Phillora from the rear, the regiment was thrusting between Phillora and Chawinda when it was suddenly counter-attacked by the enemy’s heavy Armour from Wazirali. Lieutenant Colonel A. B. Tarapore who was then at the head of his regiment defied the enemy’s charge, held his ground and gallantly attacked Phillora with one of his squadrons supported by an infantry battalion. Though under the continuous enemy tank and artillery fire, Lieutenant Colonel A B Tarapore remained unperturbed throughout this action and when wounded refused to be evacuated. Inspired by his leadership, the regiment fiercely attacked the enemy heavy armor destroying approximately 60 enemy tanks at a cost of only 9 tank casualties, and when Lieutenant Colonel A. B Tara pore was mortally wounded the regiment continues to defy the enemy.

On 11 September 1965, the 17 Horse regiment launched an attack on Phillora in the Sialkot sector at the Battle of Chawinda. The southern thrust of the attack, commanded by Lt. Col. Tarapore advanced on the right flank. Between Phillora and Chawinda, the attack met with the Pakistani Army‘s heavy armour charge from Wazirwali. Lt. Col. Tarapore held his ground and gallantly attacked Phillora under the continuous enemy tank and artillery fire. When wounded, he refused to be evacuated. He led his regiment to capture Wazirwali on 14 September, and Jassoran and Butur-Dograndi on 16 September 1965. Though his own tank was hit several times, he maintained his pivots at both these places and thereby helped the supporting infantry attacking Chawinda.

Inspired by his leadership, the regiment fiercely attacked the enemy armor and destroyed approximately sixty Pakistani Army tanks, suffering only nine tank casualties. However, Lt Col Tarapore’s tank was hit and was enveloped in flames and he died a hero’s death. The valor displayed by Lt Col A.B. Tarapore in this heroic action, which lasted six days, was in keeping with the highest traditions of the Indian Army.