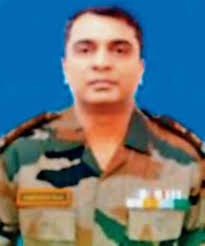 Lieutenant Colonel Ambrish Rai hailed from Barrackpore of North 24 Parganas of Kolkata, West Bengal and was born on 01st Mar 1977.  Following his childhood dream to serve in the Armed Forces, he cracked the Combined Defence Services Examination and entered the Indian Military Academy in Dec 1999. He got commissioned into the Regiment of Artillery, the combat support arm of the Indian Army, well known for its booming guns.

After completing few years of service he got married to Jyotsna and the couple had daughters, Aishani and Aaradhya. By 2016, Lt Col Ambrish Rai had put in 16 years of service, he served in various operational areas with different terrain and operating conditions and had grown into a professionally competent and committed soldier.

During 2015-16, Lt Col Ambrish Rai was serving with 821 Light Regt deployed in Siachen area of J & K as part of the ongoing Operation Meghdoot. The Indian forces were deployed along the AGPL(Actual Ground Position Line) on the dominating heights around 20 kms south west of Siachen Glacier. Lt Col Ambrish Rai’s unit was manning the posts at an altitude at 19,000 ft, with extremely inhospitable climate and harsh terrain. The troops faced extreme weather conditions on a regular basis and were required to maintain a high state of alert as well to deal with any surprise attack by the enemy forces.

On 06 June 2016, Lt Col Ambrish Rai was on duty when suddenly he had a heart attack. He was given first aid and taken to the nearby military medical  facility, but acute lack of oxygen and sub-zero temperature made the matters worse for him. He could not survive and a valiant and dedicated soldier was lost in the service of the nation. Lt Col Ambrish Rai was a committed soldier and a professionally competent officer who laid down his life in the line of his duty, following the highest traditions of the Indian Army.