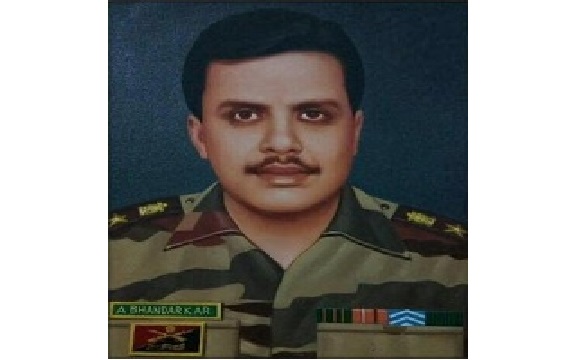 Lieutenant Colonel Ajit Bhandarkar was born in Mumbai on 31 Dec 1960. Son of Shri U V Bhandarkar, Lt Col Ajit had two brothers, and one of them, Col Arun Bhandarkar too served in the Army. He was inclined to join the Army since his childhood days and continued to follow his dream while growing up. After his initial schooling in Bangalore, he went on to study in Sainik School Bijapur, where the foundation of his future military career was laid. Eventually his dream came true, when he got selected for the prestigious National Defence Academy Khadakwasla. Later he moved to Indian Military Academy Dehradun for further training.

Lt Col Ajit Bhandarkar is survived by his wife Smt Shakuntala Bhandarkar and two sons, Nirbhay and Akshay, parents, and two brothers. His wife, Smt Shakunthala Bhandarkar, having gone through the personal experience of being a martyr’s wife, is passionate about helping other martyrs’ families. She got associated the Vasantharatna Foundation for Art, Bangalore and contributed immensely in conducting various events and activities for the families of the martyrs. The undying passion to serve the nation seems to have been inherited by Lt Col Bhandarkar’s sons too. Whilst the elder son Capt Nirbhay Bhandarkar has joined his father’s unit after passing out from OTA Chennai, Sub Lt Akshay Bhandarkar has joined the Indian Navy after graduating as an Engineer.

Citation for the “Shaurya Chakra” awarded to him reads:-

Lt Col Ajit Bhandarkar’s wife Smt Shakunthala Ajit Bhandarkar, after having completed three decades in school as an Educator, is currently the co-founder and Director of Metamorphes Foundation, a non profit organization which works towards the welfare and empowerment of veterans and veer parivars. She has also written a book “The Saga of a Braveheart Lt Col Ajit V Bhandarkar ” a biography on the brave-heart as a tribute on his 60th “Birth Anniversary”.

To keep the legacy going Metamorphes Foundation has instituted a Lt Col Ajit V Bhandarkar Memorial Award for Excellence in Schools across India. A documentary , “The Saga of a Braveheart ” by ‘MAYA films’ in association with Metamorphes Foundation has also been made and screened across India as a part of Azadi Ka Amrit Mahotsav to the students , NCC cadets, veterans, armed forces personnel and their families.