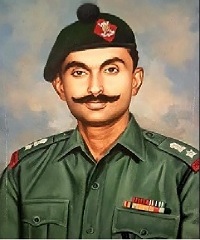 Lt Col AO Alexander hailed from the state of Kerala. He was commissioned in 1948 into the 2nd Travancore, part of the erstwhile Travancore State Forces. After the Independence, the Battalion was integrated into the Indian Army in April 1951 and designated as the 16th Battalion of the Madras Regiment (Travancore). As a consequence, on 01 April 1951, Lt Col AO Alexander was granted Regular Commission in the Indian Army. Later, as part of Army’s rationalization plan, he was moved to the 14th Battalion of the Punjab Regiment from where he qualified for the Staff College Course.

On being approved for Command, Lt Col AO Alexander moved back to his parent Battalion 16 Madras (Travancore), then located at Ranchi as part of 42 Infantry Brigade under 9 Infantry Division and took over command of the Battalion on 04 April 1966. From Ranchi, the Battalion moved to Gacham in Arunachal Pradesh as part of 192 (Independent) Infantry Brigade. Under the Brigade, the Battalion had an operational task of infiltrating deep into enemy territory self-contained a period of up to 7 days and undertaking offensive operations in adverse weather conditions. The standards of physical fitness and training achieved by the battalion under Lt Col AO Alexander paved the way for the Battalion’s outstanding performance in the 1971 Indo-Pak war in the ‘Battle of ‘Basantar’ which was fought in the Shakargarh Sector of the Western front two years after his departure from the Battalion.

Lt Col AO Alexander was posted out of the Battalion on 09 December 1969 as the Assistant Quarter Master General (AQMG) of 36 Infantry Division, responsible for planning and executing the logistic plan of the formation. After a tenure of one and a half years as the AQMG, Lt Col AO Alexander was specially chosen to raise 27 Madras and moved to Wellington (Nilgiris) where the Battalion commenced its raising on 01 June 1971, a second command tenure which was a rare honour. Raising an Infantry Battalion demanded taking action to fully equip the Battalion, integrating the men who had been made available from various units of the Regiment, training them and bringing into being an outfit which is fit for war which he did by early December 1971.

During Dec 1971, Lt Col AO Alexander was commanding 27 Madras which he had raised in June 1971 and happened to be its first 'Commanding Officer'. As the tension rose with Pakistan and the war became imminent, 27 Madras got deployed on the western border in Rajasthan. It joined action at Asutar in Jaisalmer Sector on 5 December, to reinforce 12 Infantry Division under attack at Longewala. Lt Col AO Alexander displaying his field-craft skills and leadership blunted the enemy thrust along with his troops.

After the situation stabilized, the Battalion was moved to Kutch to contain enemy intrusion which the Battalion successfully achieved. Though the ceasefire was declared on 16 Dec 1971, the situation was still tense along the IB and demanded suitable deployment of troops to deal with any misadventure by the enemy. Lt Col AO Alexander decided to lead a reconnaissance team himself to study the enemy deployment as the information was critical to to plan appropriate counter measures. On 17 Dec 1971 when the reconnaissance operation was underway, Lt Col AO Alexander and his troops were ambushed by the enemy troops. A fierce gun-battle followed thereafter with heavy exchange of fire. However Lt Col AO Alexander and his six other soldiers got seriously wounded and later succumbed to their injuries. Lt Col AO Alexander was a valiant soldier and determined commanding officer who led from the front and laid down his life in the line of his duty.

Tribute by a Comrade:

As the Commanding Officer (CO), his key result areas were physical fitness, and training. During his tenure in Ranchi, apart from training, he laid emphasis on the integration of officers and men as a team. He and his wife Mrs Lalitha Alexander maintained very close contact with the officers and their families. Mrs Lalitha Alexander participated in family welfare meetings primarily to get to know the families of Junior Commissioned officers and the Jawans and to get a feedback on the morale and motivation of the unit. Though a Christian himself, he never missed a single Mandir Parade, at the place of worship in the unit where deities of all the religions were placed and all religious festivals celebrated. To his credit, Lt Col AO Alexander integrated himself with the unit and its traditions fully within a very short period of time.

To be able to prepare the Battalion for the operational role, as a first step he laid down that all ranks will run the 2-mile Battle Physical Efficiency Test (BPET) with full authorized loads and qualify in the ranking ‘Excellent’. Tests were conducted every month and those who failed to qualify in ‘Excellent’ were required to centrally train for 2 weeks. Retest would be conducted only after the two weeks training. In the first test unfortunately he himself failed the test by about 10 seconds or so. To everyone’s surprise, the very next day the CO himself was there on the ground after lunch for the training session along with the others. This speaks volumes for his character. He led by setting personal example. Never during his entire tenure as the CO, did he give an order which he himself could not execute or obey. As a result, he gained the unusual veneration of every single soldier in the Battalion.

The second measure he undertook was to take the Battalion out for self-contained exercises to prepare the Battalion for the assigned role. At least two such exercises were carried out every month. The load carrying bags (Pack 08) of all ranks were laid out in the parade ground and loads including the extra ammunition were distributed and packed after due verification to ensure that all ranks were carrying their loads as specified. There again you could see the CO’s pack O8 laid out along with the others. The standards of physical fitness and training achieved by the battalion under Lt Col AO Alexander paved the way for the Battalion’s outstanding performance in the 1971 Indo-Pak war in the ‘Battle of ‘Basantar’ which was fought in the Shakargarh Sector of the Western front two years after his departure from the Battalion.

The Battalion was thereafter moved from Gacham to Sippi in the Subansiri Division under 5 Infantry Brigade, part of 2 Infantry Division commanded by Major General KAS Raja, a former commanding officer of the Battalion. There the battalion carried out extensive training in advance and attack operations of war in mountainous terrain. Self-contained long-range patrols in the border areas for periods up to three weeks were regularly carried out. The emphasis continued to be on physical fitness and training.

He was a man of few words and a strict disciplinarian. His personal and professional integrity were unquestionable. He went by the rules to remain impartial and fair to all ranks to the extent of being nicknamed Army Order Alexander. Though very serious in his appearance, he had a soft side to his personality. On a day when he punished a Jawan, he did not have is lunch but spent time in prayers.

He was not a person who would change his mind easily or compromise on issues that he felt strongly about. In one case when one of our outstanding Junior Commissioned Officers (JCO) Subedar Sivaraman who remained an instructor at the Infantry School, Mhow, both at the weapons and the Mortar wing continuously for six years under then Brigadier Sam Manekshaw, MC at his special request, sought a National Cadet Corps (NCC) posting out of turn as his knees were giving him trouble during our tenure in Gacham. Lt Col AO Alexander flatly refused to accede to the request saying he should go to the hospital if he had a knee problem and he could not violate the ERE roster which the Battalion was maintaining. He accordingly sent a JCO who was the senior most in the ERE roster, filling up the only available vacancy on NCC. Despite continuous prodding, he remained unmoved till it was pointed out that the JCO was kept out of the battalion for six years for the good name of the unit and now that he has made a request, he should be helped at a time when he needed it. Finally, he agreed to the posting only if an additional vacancy was allotted specifically for him. An additional vacancy was thereafter sought and the JCO was sent on posting.