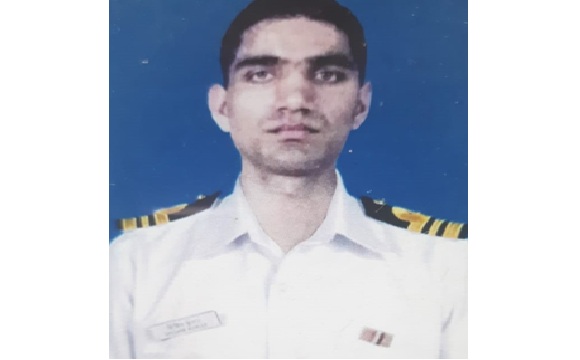 Lt Cdr Shwet Gupta hailed from Bilaspur district of Himachal Pradesh and was born on 12 October 1978. Son of Shri Thakur Dass Gupta and Smt Veena Gupta, Lt Cdr Shwet Gupta was very cheerful by nature and had a strong desire to excel in everything he did. Though brilliant in academics, he participated in extra curricular activities too right from younger days.

After completing his primary schooling from Saint Mary School, Sunder Nagar in Himachal Pradesh, he got selected to join the well known Rashtriya Military School Chail in Himachal Pradesh. The foundation of his future military career was laid in this school. He excelled in various school activities and was appointed as the School Captain. After finishing his schooling, he got admission in an Engineering college, but his love for the Armed Forces brought him to Naval Engineering College, Lonavala in Maharashtra. He did exceedingly well in all aspects of training and passed out as the Best Cadet, winning the coveted 'Sword of Honour'.

On reaching the scene of incident, he saw three sailors lying face down at the bottom of the compartment due to suffocation by H2S gas. He knew that without mask, it was very dangerous to enter the compartment, but without thinking about his personal safety, he did not waste a moment and went into the compartment. Lt Cdr Shwet Gupta bravely picked up one sailor and tied him around his waist with a rope and lifted another sailor on his shoulder and started leaving the compartment. However, by that time, he had substantial exposure to the toxic H2S gas and became unconscious. Lt Cdr Shwet Gupta displayed commendable courage in trying to rescue the trapped personnel without caring about his own safety.

He was evacuated to the Naval Hospital for treatment, where he battled for his for 9 long days. He eventually breathed his last on 10 Feb 2008. Lt Cdr Shwet Gupta was a valiant soldier and gritty officer who led by personal example in keeping with the highest traditions of the Indian Navy. Lt Cdr Shwet Gupta was awarded "Nao Sena Medal" (Gallantry) posthumously for his exceptional courage, leadership, devotion to duty, camaraderie and supreme sacrifice.

The citation for the Nao Sena Medal awarded to him reads:

Lieutenant Commander Shwet Gupta, was commissioning crew onboard INS Jalashwa and was in-charge of the Main Propulsion Plant II. On 01 February 2008 at about 1640 hrs, Lieutenant Commander Shwet Gupta after his duty hours heard an emergency announcement about casualty in a compartment. Though, he had just finished a strenuous watch he immediately rushed to provide assistance. On reaching the scene of incident, he saw three sailors lying face down at the bottom of the compartment due to suffocation by H2S gas. The officer bravely picked up one sailor and tied him around his waist with a rope and lifted another sailor on his shoulder and started leaving the compartment. However, by that time, the officer was overwhelmed by strong pungent and suffocating H2S gas and became unconscious and succumbed to the affects of poisonous H2S gas. The selflessness, moral and physical courage, valour and disregard to personal safety and life in face of grave danger exhibited by the officer in attempting rescue of personnel trapped in the compartment filled with highly toxic and lethal gas and against imminent danger is in keeping with the highest traditions of the Indian Navy and time-honored Military adage ‘Service before Self’.

Lieutenant Commander Shwet Gupta was awarded Nao Sena Medal (Gallantry) (Posthumous) for his exceptional courage and initiative in the face of great danger.