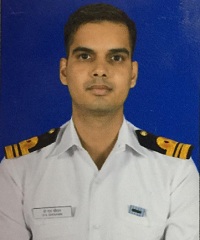 Lt Cdr Dharmendra Singh Chouhan hailed from Ratlam city of Madhya Pradesh. After completing his Engineering, he joined Indian Navy in the year-2013. Lt Cdr D S Chouhan was brilliant in academics and also excelled in sports during his student days. After joining the Navy, he developed into a committed soldier and an officer who took immense pride in his job. Soldiering was his passion and it got reflected in his conduct at all times.

By the year-2019, Lt Cdr D S Chouhan had put in nearly 6 yrs of service and had developed expertise in various naval operations. After serving for a couple of years, Lt Cdr Chouhan got married with Ms. Karuna Singh on 10th Mar 2019. He could spend only 15 days with his wife before he returned back to his duty.

As soon as the fire was noticed in the fuel pipe, the fire-fighting crew immediately cut fuel supply to prevent further spread of fire. Lt Cdr Chouhan sensing the gravity of the situation swung into action giving directions to his men to bring the fire under control and prevent any damage to men and material. Lt Cdr Chouhan was leading the operation himself taking actions at a frenetic pace. However, during the fire fighting operation, Lt Cdr Chouhan was hit by a jet of hot steam when he went into the smoke-filled room to fight the fire. He had entered the room without caring for his own safety but the sudden blast of hot steam left him unconscious. He later succumbed to his burn injuries and was martyred.