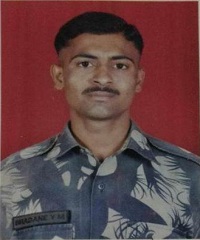 L/Nk Yogesh Murlidhar Bhadane hailed from Khalane village in Dhule district of Maharashtra. He was a brave and committed soldier, who lost his life in the unilateral violation of cease fire by the Pakistani army troops at Sunderbani sector in J & K.

India shares a 3,323-km border with Pakistan, of which 221 km of the IB and 740 km of the LoC fall in Jammu and Kashmir. The LoC is highly active and volatile where cease fire violations occur very often and without any warning. The year 2017, recorded the highest number of ceasefire violations in the past decade resulting in the death of 35 people, including 19 army personnel and four BSF men. Another cease fire violation took place in Rajouri district along the LoC on 13 Jan 2018.

On 13 Jan 2018, Pakistan Army troops initiated unprovoked firing on Indian posts from across the border in the Sunderbani sector, prompting the Indian troops guarding the LoC to retaliate strongly and effectively. L/Nk Yogesh Murlidhar Bhadane was manning a forward post in Sunderbani sector during that period. At around  2.30 pm, during the heavy exchange of fire , L/Nk Bhadane was hit by one of the sniper shots. He was  immediately evacuated and rushed to the base hospital for the treatment. However, L/Nk Yogesh Murlidhar Bhadane succumbed to his injuries and laid down his life in the service of the nation.