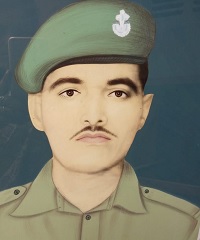 Lance Naik Madan Singh was born on 20 Jul,1947 in Siampura Bhitera village of Khetri in Jhunjhunu district of Rajasthan. He was eldest among the four siblings and had lost his father at an early age. He joined the Indian army when he was 18-year old as his mother had serious medical problem and was unable to take care of the children.

During the 1971 war for liberation of Bangladesh, Lance Naik Madan Singh’s regiment was given the task of capturing an enemy position. Lance Naik Madan Singh, with utter disregard for his personal safety, volunteered for the task and crawled towards the enemy position, holding a few phosphorous grenades. During the process, he was shot in both his legs but undaunted, he continued crawling up towards the stock of ammunition in the building. Thereafter, he received a machine gun burst in his shoulder and still undeterred, though bleeding profusely, he crawled up to the building and lobbed the grenades into it, setting it on fire before succumbing to his wounds. His exceptional bravery forced the enemy to abandon the building and enabled the troops to capture the objective subsequently.

Lance Naik Madan Singh, with merely 6 yrs of service with the Battalion, displayed outstanding courage with utter disregard to his personal safety and made supreme sacrifice in the highest tradition of Indian army.