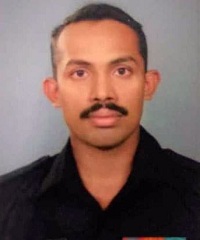 Lance Naik Antony Sebastian KM hailed from Manakunnam village of kannayanur tehsil in Ernakulam district of Kerala. He was a brave and committed soldier who lost his life in an unprovoked violation of ceasefire by the Pakistani army troops when they opened fire on the army post along the line of control on 12th Nov 2018 in Poonch district of Jammu and Kashmir.

During Nov 2018, Lance Naik Antony Sebastian’s unit was deployed in the Krishnaghati sector near LOC  in Poonch district of J & K. The Pakistani forces often resorted to unprovoked firing from across the border in this area. The year 2018 witnessed the highest number of cease fire violation and cross border firing incidents from Pakistan both at International border and LoC. Around 1435 cases of cross border firing were reported from January to July 2018 alone. On 12th Nov, Lance Naik Antony Sebastian was manning one of the forward posts in Krishnaghati Sector. At about 5.15 PM, Pakistan Army resorted to an unprovoked firing in this Sector (Mendhar). The army retaliated in a befitting manner resulting in a heavy exchange of fire.