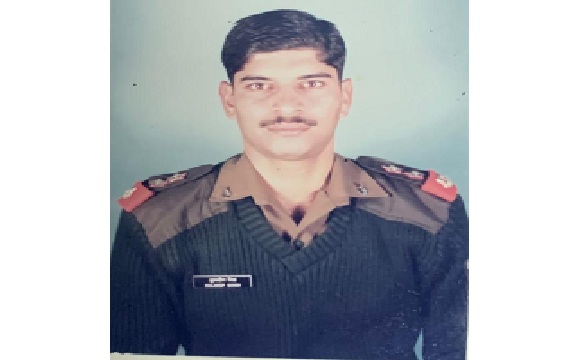 Lieutenant Kuldeep Singh hailed from Rohtak district in Haryana and was born on 15 March 1978. Son of Shri Khushi Ram and Smt Raj Kumari, he was youngest of five siblings and had one brother Partap and three sisters Kanta, Neelam & Sheela as his siblings. He did his schooling from Campus School, Rohtak and completed his graduation in commerce (B.Com) from Government College (Now Neki Ram College), Rohtak. He was very keen to join the Armed Forces right from his childhood and continued to pursue his dream.

Soon after his graduation, he cleared the Combined Defence Services Examination in 1999 and went to Indian Military Academy, Dehradun for his training. He passed out of IMA Dehradun as a Lieutenant on 9 December 2000 at the age of 21 years. He was Commissioned into 11 Sikh LI of the Sikh Light Infantry Regiment, an infantry Regiment known for its brave soldiers and rich history of various battle honours. As his first assignment, he got posted to the trouble torn Jammu and Kashmir.

During July 2001, Lt Kuldeep Singh's unit 11 Sikh LI was deployed in the forests of Baramula district of Jammu and Kashmir. The unit troops were called upon to undertake operations against the militants on a regular basis as the area of its operation was affected by large scale militant activities. One such operation was undertaken by the unit on 04th July 2001, based on the inputs from the intelligence sources. Lt Kuldeep Singh was tasked to lead that operation in a village falling under the AOR(Area of Responsibility) of the unit.

Lt Kuldeep Singh reached the suspected area along with his troops and launched a search and cordon operation. Soon the troops made contact with the militants and decided to tighten the cordon. The operation was being conducted in the wee hours (about 2:30 AM) in complete darkness and it was very challenging to block the escape routes of the militants. But Lt Kuldeep Singh leading from the front deployed his troops tactically and engaged the militants. In the ensuing gun battle, there was a heavy exchange of fire from both sides. However, during this fierce exchange of fire Lt Kuldeep Singh got hit on the left side of his head and was severely injured. He later succumbed to his injuries and was martyred. Lt Kuldeep Singh was a valiant soldier and a fine officer who led from the front like a good military leader. He laid down his life at the age of 23 years in the service of the nation following the highest traditions of the Indian army.