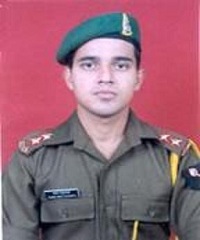 Lieutenant Kanad Bhattacharya hailed from Baranagar in Kolkata in West Bengal. Son of an income tax officer, Lt Kanad was born and brought up at Tala near Shyambazar in north Calcutta. He studied in St. James School and graduated from SA Jaipuria college in Kolkata. Lt Kanad was a keen sportsman during his student days and played cricket very well. He also had an inclination towards martial arts and was a karate black belt holder.

Lt Kanad always nursed the idea of joining the armed forces and followed his dream after his college education. and a good cricketer. He joined the Army through OTA and was commissioned into8 Sikh of the famed Sikh Regiment, one of the oldest regiments known for its intrepid soldiers and numerous battle honours. As his first assignment after commissioning, Lt Kanad got posted to the unit which was deployed in J &K and got involved in the Kargil war.

There were reports about Pakistani infiltration in May 1999 and Lt Kanad Bhattacharya’s unit was deployed along the LOC near Tiger hill during that time. By the third week of May 1999, the legitimacy of these reports was proven and it had been established that the infiltration had been done on a large scale in various sectors, including the Tiger hill area. Consequently, on 21 May, Lt Kanad Bhattacharya was tasked to establish a foothold on a northeastern ridge near Tiger Hill. The route was inaccessible and was covered with snow. While Sepoy Major Singh was climbing up, he detected movement of intruders coming down with heavy weapons towards them. The intruders started firing at the patrol with heavy automatic and sniper fire. Lt Kanad Bhattacharya and Sepoy Major Singh divided the patrol into two groups and started engaging the intruders from different positions thereby displaying outstanding professional competence. The heavy exchange of fire continued between Lt Kanad’s patrol and the intruders.

Lt Kanad and his troops kept constantly returning the fire with grit and determination. In the ensuing firefight, a number of patrol members including Lt Kanad received multiple gunshot wounds. Lt Kanad Bhattacharya later succumbed to his injuries and was martyred. The patrol could not come back and was declared missing in action on 21 May 99. The body of Lt Kanad Bhattacharya was recovered from the area of action on 15 Jul 99 buried in snow after the Indian forces had captured the Tiger Hill. Lt Kanad was a gallant soldier and a fine officer who laid down his life in the service of the nation at the young age of 22 years.