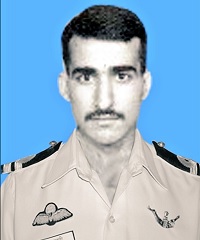 Lieutenant Dharambir Singh Sihag hailed from Miran village in Toshan Tehsil of Bhiwani district in Haryana. He always nursed the idea of serving in the Armed Forces while growing up and eventually got selected to join the Navy after completing his education. After completing his training he joined an operational Naval unit and later became part of MARCOS, the Marine Commandos of Indian Navy, which came into being in February 1987.

Lt Dharambir Singh Sihag underwent rigorous training to qualify as a member of MARCOS, who are capable of operating in all types of environments; at sea, in air and on land. Lt Sihag and his comrades as marine commandos were trained to undertake specialized maritime operations in J&K through the Jhelum river and Wular Lake, a 65 square kms freshwater lake. As the Kargil war broke out in May 1999, Marcos too were deployed in J&K to support army operations.

During 1999, Lt Dharambir Singh Sihag was serving with INS Abhimanyu, the Naval base for MARCOS-a force trained and equipped for the conduct of special operations in a maritime environment. In May 1999, the Indian Army detected a massive infiltration by the Pakistani military and paramilitary forces in the Kargil region of Jammu and Kashmir. The army quickly mobilized its forces to drive out the Pakistani infiltrators from Indian territory. In order to support Army operations, MARCOS too got deployed in strategic areas to undertake special operations.  Lt Dharambir Singh Sihag and his team members were tasked for one such special operation in Bandipore district on 12 Aug 1999.

Based on the specific information from the intelligence sources, it was decided to launch a team of marine commandos in Gurura area of Bandipore district in Kashmir. As leader of the task force, Lt Sihag along with his commandos reached the suspected area on 12 Aug as planned. The path to the objective was mined and it had to be sanitized for safe advance of the troops. Lt Sihag along with his buddy PO CD I Mahavir Singh decided to clear the landmines first to make the area safe. They diligently managed to diffuse two landmines, but they were under watch by the terrorists. Frustrated and perturbed by Lt Sihag's actions, the terrorist retaliated by remotely exploding the third landmine. The resulting blast had devastating effect severely injuring Lt Sihag and PO CD I Mahavir Singh. They soon succumbed to their injuries and were martyred. Lt DS Sihag was a valiant soldier and gritty officer who led from the front and laid down his life in the line of his duty, following the highest traditions of Indian Navy.

Lt DS Sihag was given the gallantry award, “Nao Sena Medal” for his admirable courage, devotion to duty and supreme sacrifice.

The citation for "Nao Sena Medal" awarded to him reads:

On 12 August 1999, Lieutenant Dharambir Singh Sihag was leading the MARCOS team in the general area Gurura of Bandipore district in Kashmir. He and his buddy PO CD I Mahavir Singh, had diligently diffused two landmines in order to clear the path of advancing MARCOS team. However, perturbed by this exceptional reprisal, the terrorist retaliated by remotely exploding the third landmine, thereby martyring Lieutenant Dharambir Singh and PO CD I Mahavir Singh.
He exemplified courage and devotion to duty in keeping with the finest traditions of the Indian Navy. For his supreme act of valour, the officer is awarded the Nao Sena Medal (Gallantry), posthumously.