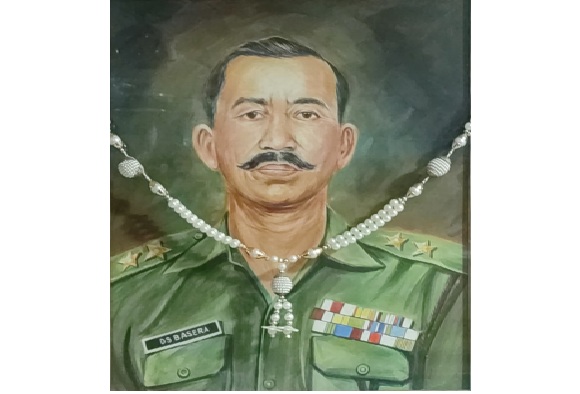 Place of birth : Pithoragarh, UP

Lieutenant DS Basera hailed from Pithoragarh in Uttar Pradesh and was born on 10 Aug 1943. Son of Shri Kishan Singh Basera and Smt Hira Devi, he had a brother Sher Singh Basera and a sister Ganga Devi as his siblings.  He was part of the boys sports company at Ranikhet and was inclined to serve in the Armed Forces since his younger days. Eventually, he got selected to join the Army after his initial education. He was recruited into 4 Kumaon battalion of the Kumaon Regiment, an infantry Regiment well known for its dauntless soldiers and numerous battle exploits. After completing his training he served in various operational areas and developed into a committed soldier. After serving for few years, he got married to Ms Basanti and the couple had three sons Narendra Singh, Jagdish Singh, Girish Singh, and a daughter Babita.

He became an excellent drill instructor and also had a tenure as an instructor at NDA. He got promoted to a Junior Commissioned Officer in 4 Kumaon and when the first RC commission scheme was opened, he became part of the first RC course. He became the first RCO(Regimental Commissioned Officer) of "Live Dangerously" team and was commissioned into the 18th Kumaon battalion on 12 August 1985. Lt DS Basera was an affable and jovial person with a cheerful disposition and endeared himself to everyone in the unit. He had great respect for the traditions of the paltan and lived by the motto of the regiment, "Parakramo Vijayate" meaning Valour Triumphs.

During 1987, Lt DS Basera's unit was deployed in Lucknow Cantt, but was sent to Sri Lanka as part of IPKF in October 1987.  After the induction of Indian forces in Aug 1987 in Sri Lanka, as part of the Indo-Sri Lankan accord, the militants were supposed to surrender but the dreaded LTTE backed out and unleashed a war on Indian forces. Initially, only 54 division of the Army was inducted but the escalation of the operations brought three more divisions 3, 4 and 57 into the conflict.  After having been inducted in Sri Lanka, Lt Basera's unit got involved in numerous operations against the LTTE militants.  Lt DS Basera was tasked to be part of one such operation on 27 Oct 1987.

While moving for "Op Pawan", Lt DS Basera was appointed as the second in command of Bravo company of the paltan. On 26 Oct 1987, 18 Kumaon was tasked to move from Palali to Jaffna to link up with 41 Infantry Brigade. The Bravo company led the advance with Maj H S Hanspal as Company Commander and Lt DS Basera as second in command. As the advance was underway, the troops came under attack by the LTTE militants in Kokovil. The Company Commander immediately swung into action and asked his 2-IC Lt DS Basera to probe the place from where the fire was being mounted on the column of the troops. The LTTE militants presumable had prior information about the movement of troops and had laid a trap. Lt DS Basera along with his JCO, Sub Shambhu and 12 other ranks quickly moved in the direction of fire.

As Lt DS Basera and his  comrades moved further to probe, they came under intense automatic fire from the militants who were hiding in the area. A fierce gun battle ensued thereafter with exchange of fire from both sides. Lt DS Basera and his soldiers fought valiantly but got seriously wounded during the gun battle. They soon succumbed to their injuries and were martyred. Lt DS Basera was a valiant soldier and committed officer, who laid down his life in the line of his duty. Following the legacy of Lt DS Basera, his son Jagdish Singh too joined the Army and had the distinction of serving in the battalion of his father "18 Kumaon". He later retired as Lieutenant Colonel in the year 2014.