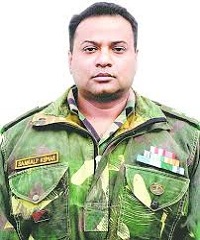 Lieutenant Colonel Sankalp Kumar hailed from Ranchi in the state of Jharkhand. He was commissioned into 24 Punjab of the Punjab Regiment, an infantry regiment with a long history of bravery and battle honours. After serving for a few years he got married to Ms. Priya and the couple had two daughters Sara and Mana. Besides being a tough soldier, Lt Col Sankalp was a loving father too. Whenever he would come back home, Lt Col Sankalp made sure that he spent valuable time with the family. He cooked for the girls, took them out for cycling and swimming and watched cartoons with them. It was like he became a child with the girls. Lt Col Sankalp’s parents admired their son’s responsibility towards everything, be it the nation, the family or a stranger on the streets.

Lt Col Sankalp Kumar always led from the front. The bullets he faced in his earlier encounter with terrorists in 2004 emboldened his spirits to fight the militants in 2014 too.

On 05 December 2014, Lt Col Sankalp Kumar was leading a column as part of the operation launched to neutralize the Fidayeen attack on the army camp of 31 Field Regiment at Baramulla district of Jammu and Kashmir. The army camp was located about 12 Kms from Uri town. At 0545 hours, he established stops around the western side of Mahura Gun Area wherein six terrorists had sneaked inside and caused the casualty to five 0ther Ranks. At 0550 hours Lt Col Sankalp Kumar along with Hav Subhash Chand and Lance Naik Gurmail Singh came under effective fire. The officer retaliated immediately pinning down the terrorists.

On 05 December 2014, he was leading a column as part of the operation launched to neutralize the Fidayeen attack on 31 Field Regiment at Baramulla district of Jammu and Kashmir. At 0545 hours, he established stops around western side of Mahura Gun Area wherein six terrorists sneaked inside and caused casualty to five Other Ranks. At 0550 hours Lt Col Sankalp Kumar along with Hav Subhash Chand and Lance Naik Gurmail Singh came under effective fire. The officer retaliated immediately pinning down the terrorists.

Thereafter, terrorists lobbed grenades and fired a volley of burst grievously injuring the officer. With utter disregard to his personal safety,the officer continued to engage the terrorist who intended to cause more casualties to own troops. In a rare display of dauntless courage he pinned the terrorist with effective fire thereby resulting in his subsequent elimination before making supreme sacrifice of his life.

Lt Col Sankalp Kumar’s father, 70-year-old S K Shukla, said: “I am extremely unfortunate that my son has been killed. But I am also proud that he laid down his life for the nation.”

On the day of his funeral, a pall of gloom fell over Sainik Colony at Ranchi where Lt Col Kumar was born and brought up. Professor I D Ram, his neighbour, said: “I am shocked. He was dear to everyone.”