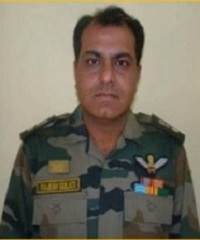 Lt Col Rajesh Gulati belonged to 202 Army Aviation Squadron and was operating in J & K area in the year 2015. He was an experienced helicopter pilot with more than 1000 flying hours to his credit. He also had served as a flying instructor which further enhanced his flying skills in various air operations.

Following the tragic floods in Jammu and Kashmir in September 2014, the Northern Command of the armed forces launched a humanitarian assistance mission to provide relief and rescue operations. The armed forces dispatched boats, helicopters, and air crafts to help in the search and rescue. Lt Col Rajesh Gulati took part in these operations and carried out many successful missions.

On February 10, 2015, Lt Col Rajesh Gulati along with his co-pilot Mah Tahir Hussain Khan was tasked for an operational mission and took off from Manasbal at 7 PM. Both the pilots were experienced and had undertaken similar missions earlier many times. They had flown extensively during flood relief operations in Kashmir and had braved stones thrown at their chopper.

Lt Col Rajesh Gulati was flying the Dhruv helicopter, the indigenously-built Advanced Light Helicopter -a twin-engine aircraft which weighs about five tons and is manufactured by Government-owned Hindustan Aeronautics Limited. After flying for an hour after take off the helicopter developed some serious snag and crashed near the Kurshu forest at Safapora of Bandipora district in J & K. Major Tahir Hussain Khan and Lt Col Gulati could not survive the crash and two committed soldiers laid down their lives in the service of the nation.

Lieutenant Colonel Rajesh Gulati was an ace pilot and a dedicated soldier, who will always be remembered for his selfless service and supreme sacrifice.