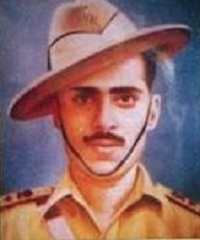 Lt Col Jagannath Raoji Chitnis was born on 20th August 1918 in Satara, Maharashtra. Son of Sri Raoji Gopal Chitnis, Lt Col Chitnis got commissioned into the Third Battalion of the Gorkha Rifles on 12 Apr 1942. After passing out from OTS Bangalore, Lt Col Chitnis served with his unit in different operational areas and evolved into an experienced and battle-hardened soldier.

By 1956, Lt Col Chitnis had put in about 14 years of service and had been promoted to the rank of a Lt Col. In 1956, he had become commanding officer of 1/3 Gorkha Rifles and was serving in the northeastern border of the country. Lt Col Chitnis was a committed soldier and a fine officer,  who commanded the respect of his men. As a thorough professional, Lt Col Chitnis had trained and established his battalion into a lethal strike force.

During 1956, Lt Col Jagannath Raoji Chitnis was posted in Nagaland as Commanding Officer of 1/3 Gorkha Rifles. On 14th June, 1956, Lt Col Chitnis accompanied by Subedar Major Nain Singh was heading towards Zunhebeto from Mokokchung with a treasury chest containing the pay of the battalion. There was a convoy of eight jeeps with a platoon as escort. On nearing the 21st km milestone, around 100 Naga rebels belonging to Gen Kaito Sema’s Federal Army opened fire on the middle jeep of the convoy. These rebels were heavily armed with LMGs (Light Machine Guns), sten guns and rifles. The sudden attack resulted in three of the jeeps getting isolated.

Lt Col Chitnis quickly assessed the situation and halted the other five jeeps. He along with four of his soldiers had already sustained injuries in the ensuing gunfire. After quickly assembling his troops, he arranged for covering the incessant firing. Leading from the front and backed by his platoon, he began moving towards the militants’ position amidst ongoing gunfire. About 150 yards short of the rebels’ bunkers, Lt Col Chitnis ordered a counter-attack despite being wounded in the leg. He forged ahead undeterred and attacked the rebels with a bayonet, killing one and injuring another. Thereafter when an LMG opened fire on his party from a flank, he again led a bayonet charge against the LMG post and got critically injured in the stomach. As a consequence of his grave injuries, he fell 15 yards from the rebel bunker but that didn’t diminish his zeal as he continued to motivate and guide his platoon to destroy the rebel position. Lt Col Chitnis was martyred, but his troops motivated by the inspirational leadership of their commanding officer finally managed to destroy the rebel camp and killed 20 rebels.

Lt Colonel JR Chitnis, Commanding Officer of 1/3 Gurkha Rifles, laid down his life in Nagaland in 1956 and was awarded the Ashok Chakra,