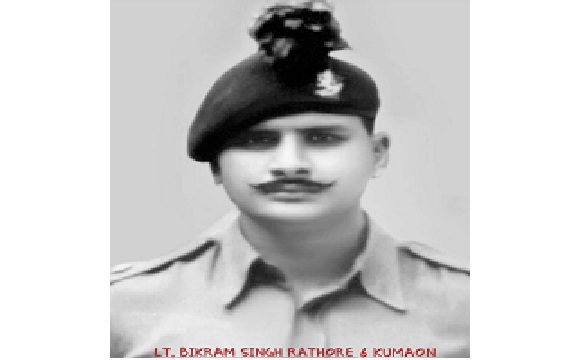 Lieutenant Bikram Singh hailed from Sialba village located in Kharar tehsil of Sahibzada Ajit Singh Nagar district in Punjab. He had a strong desire to serve in the Army since his younger days, which grew along with age. Eventually he followed the well-marked footsteps of his ancestors and joined the National Defense Academy (NDA) in 1956. During the training, he acquitted himself as a natural horseman and an accomplished polo player. His sheer physicality, impressive bearing and thoroughbred conduct attracted the attention of Lt Gen K Bahadur Singh (Kumaon Regiment) who talked out Lt Bikram from opting for Rajput Regiment, as Lt Gen K Bahadur Singh wanted the fine soldiers for his own Regiment. So he commissioned into the 6th battalion of the Kumaon Regiment, an infantry regiment known for its gallant soldiers and numerous battle exploits. Barely one year into service, Lt Bikram Singh got involved into thick of operations as his unit got deployed on the eastern border, when the war with China became imminent.

During the 1962 Indo-China war, Lt Bikram Singh’s unit 6 Kumaon was deployed in Siang Frontier Division, south of Mc Mohan line along the border. By third week of Oct 1962, India had already faced many reverses in the war and many organisational changes were made to deal with the situation. Initially 5 Infantry Brigade was responsible for the Walong Sector. As a sequel to the reorganization, after the fall of Tawang, a new formation 2 Infantry Division was raised with Maj Gen MS Pathania as the GOC. The newly raised Division was assigned the responsibility of the whole of NEFA, less Kameng (Tawang) Sector. Consequently, 181 Infantry Brigade was allocated for Walong Sector. However, later on GOC’s insistence, entire 181 Infantry Brigade was moved out and 11 Infantry Brigade under Brigadier NC Rawlley was moved to Walong. Though the main axes of penetration by the Chinese forces were Tawang-Bomdila-Rupa axis, the Taksing-Limeking Axis, Mechuka/Manigong-Tato axis, the Gelling-Tuting axis, and the Kibithu-Walong axis, some fierce battles were fought in the Walong-Kibithu area of present Anjaw district. Lt Bikram Singh’s unit 6 Kumaon was part of the bloody "Battle of Walong".

Lt Bikram Singh Rathore as D Company commander of 6 Kumaon was part of two intense engagements with Chinese forces in Walong. The first engagement was at Namti Nullah, which gave the China’s People’s Liberation Army a bloody nose. In the Battle of Namti Nullah, Lt Bikram Singh and his soldiers planned a classic ambush at a small hanging bridge over Namti Nallah. They removed the last few planks of the hanging bridge. When the Chinese came in at 3 a.m. on October 23rd, the first Chinese soldier stepped on the plank and fell into the Nullah. Many lights were fired revealing the Chinese in a cramped path. The mortars and MMGs brought down accurate fire on the enemy soldiers and as a result about 200 Chinese troops were killed or wounded in this action against nine Indian fatalities.

After the success at Namti Nallah, Lt Bikram Singh was tasked to occupy critical defenses on “West Ridge” overlooking the Walong town. On 15 Nov 62, a Division Strength (10,000 soldiers) of Chinese Army launched their offensive against 120 soldiers of Delta Company of 6 Kumaon. Lt Bikram Singh was tasked to hold the defenses of West Ridge at all costs till 1100 hours of 16 Nov 62.  Lt Bikram Singh promised his Brigade Commander that he would never withdraw and hold on till his end.  Waves of Chinese attacks came on his post one after the other. Lt Bikram Singh and his Kumaonis fought gallantly and repulsed waves of Chinese attacks. Later the Chinese fanned out and the next attack came with an overwhelming superiority of numbers from three sides (the forth side was a steep cliff), supported by machine gun fire & heavy artillery bombardment. The tenacity of Lt Bikram Singh and his troops still prevented Chinese to capture West Ridge, however at a heavy price of precious lives.  Lt Bikram Singh held on to the post well beyond the assigned time of 1100 hrs but was left with handful of troops and little ammunition. Even though he completed the assigned task, he took the decision to stay on and repel the attack till his end, living up to the promise he made to his brigade commander.  The enemy suffered over 500 causalities before Lt Bikram Singh ( the last on post ) was martyred on 16 Nov 1962.  Lt Bikram Singh was a gallant soldier and a gritty officer who led from the front and laid down his life in the line of his duty.

Lt Bikram Singh had repeatedly stared death in the face during the 27 days of relentless battle,(Battle of Walong) as days earlier he had written a letter home, explicitly stating, "Don't worry at all. Traditions of our race can never be forgotten. I have killed many to avenge my comrades. I will kill more till the b…. finish up". He fought as only a true warrior could, he was the last man standing of the 107 men of his paltan who were martyred on 16th Nov 1962.