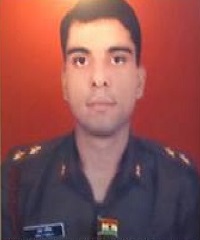 Lt Abhay Pareek was born on Aug 13 1977, to Mrs. Prabha Pareek & Mr. K.S Pareek. In his short but illustrious life, Lt Abhay won many accolades and awards, showing his brilliance, from childhood (school days) to youth (college). During his school days he was awarded the best instrumental musician & singer in an Inter-School Competition, New Delhi, received the best Tabla player award, and excelled in the field of sports, especially in Basketball & Volleyball. He continued gathering awards in his college days too and endeared himself to everyone in the college. During his stint in the college he was given the prestigious ‘Gibson Award’, awarded annually to a student who excels in all walks of life; in GCA Ajmer and was also chosen best NCC Cadet. He was also a gold medal winner three times consecutively in Boxing Championships.

Lt Abhay was commissioned in the Indian Army in September 2000 in 69 Field Regiment Artillery, ‘The Queen of War’. Immediately, after his commission from the academy in the Artillery Regiment he was posted in Jammu & Kashmir, alongside the LOC.

During the Op Parakram Lt Abhay’s unit was deployed alongside the LOC, at about a distance of 100-150 meters from the enemy post . Following an attack on the Parliament ‘Operation Parakram’ was undertaken and had resulted into a state of undeclared war between the two nations. Lt Abhay was positioned as a Forward Observation Officer, along with his troops to monitor the situation and retaliate as per the operation plan.

On 10 June 2002, as the cross border firing escalated Lt Abhay swung into action and launched massive artillery attack on the enemy post, resulting into heavy losses to the enemy in terms of men & material. But , unfortunately during the fierce exchange of firing, Lt Abhay was hit and severely injured by the enemy’s Anti-tank Missile. He , however during evacuation from the post, undeterred gave proper salutes to his CO and senior officers, shook hands with the soldiers. His last words to his troops were—“MAIN WAPAS AAONGA….I SHALL COME BACK”. Lt Abhay later succumbed to his injuries and thus guarding the frontiers of the motherland was martyred.

Though, Lt Abhay Pareek  may have created a void in the lives of his family members but as an exceptional officer and a brave soldier he will continue to inspire future generations.