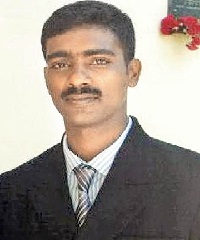 LEMP Liju Lawrence was born on January 10, 1985 in Thiruvananthapuram district of Kerala . Son of Thomas and Vimala, LEMP Lawrence had one younger brother Bijju. He completed B Sc (Electronics) from Emanuel college, Thiruvananthapuram and joined the Navy soon after, on August 28, 2003.

After his training LEMP Lawrence was posted to the Naval base at Kochi, where he pursued higher studies as well. He had recently completed his MBA and was really excited to be part of the crew of INS Sindhurakshak.

On 14 Aug 2013, LEMP Liju Lawrence was on-board INS Sindhurakshak, the 3000-tonne Kilo class submarine, powered by a combination of diesel generators and electric batteries. On that day, the submarine at Naval dockyard in Mumbai was rocked by a series of explosions and started sinking along with 18 crew members with 3 officers and 15 sailors.