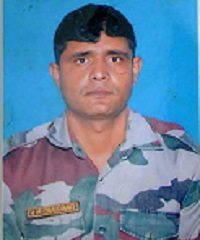 Lance Naik Ved Mitra joined the Indian Army in 2001. He was part of the 58 Engineers Regiment. He had worked for the United Nations Peace Mission in Sudan for almost six months. In January 2015, he was stationed in Meerut at HQ 416 Engineers Brigade.

On August 13th, 2015, a shocking incident took place in Meerut at Rohta road. Lance Naik Chaudhary who lived in Gopal Nagar had gone to a milk booth in Hardev Nagar to buy some milk. On his way, he noticed six young men teasing and harassing the booth owner Krishnan Pal’s 21-year-old daughter. Lance Naik Chaudhary could not tolerate it and immediately came to help. He parked his bike and headed towards the commotion. Calmly, he asked them to stop and it was then that one of the miscreants slapped the soldier. Following this, Lance Naik Chaudhary along with the booth owner’s sons got into a fistfight. The men finally backed off and left but only to return with 30 more friends who started beating him with iron rods, bricks, and hockey sticks. It was reported that for nearly 25 minutes he fought with his bare hands. But eventually, he was overpowered. Once his attackers fled the scene  Lance Naik Chaudhary was taken to an army hospital, where he succumbed to his wounds.

The bravery and fearlessness exhibited by Lance Naik Chaudhary were exemplary. Despite the odds, he put the safety of the woman above his own and was extremely steadfast in his moral ideals.  He sacrificed his life to protect the honour of a young girl. He gave his life, trying to stand by the ideals of the Indian Army to protect the country and its people. For his courage and devotion to his country and countrymen, he will always be remembered. He is an inspiration to every citizen of India.

He is survived by his wife and two children aged nine & seven.