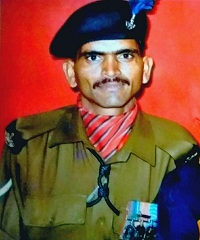 Lance Naik Suresh Vishnu Sonwane hailed from Kajisangavi village of Chandwad tehsil in Nasik district of Maharashtra and was born on 21 Jun 1968. Son of Shri Vishnu Karbhari, L/Nk Suresh Vishnu joined the army at the age of 20 years on 29th Jun 1988. He was recruited into 16 MLI bn of the Maratha Light Infantry Regiment, an infantry regiment well known for its gallant soldiers and a number of battle honours.

After completing his training, L/Nk Suresh Vishnu went to Sri Lanka as part of Op Pawan. Later he also participated in Op savage from Jan 1990 to Jul 1990. Thereafter L/Nk Suresh Vishnu also took part in Op Orchid from Mar 1993 to Nov 1995 and Op Rakshak from Dec 1995 to Jun 1999. After serving for a few years with his parent unit he was later deputed to serve with 27 RR deployed in J&K for Counter-Insurgency operations.

L/Nk Suresh Vishnu along with his comrades reached the suspected area as per the plan and launched the search and cordon operation. Soon the troops made contact with the militants and a fierce gun battle followed thereafter. However, during the exchange of fire L/Nk Suresh Vishnu received multiple gunshots and was seriously injured. Later succumbed to his injuries and was martyred.

L/Nk Suresh Vishnu was a brave and dedicated soldier who laid down his life in the line of his duty. He is survived by his wife Smt Surekha Suresh Sonwane.