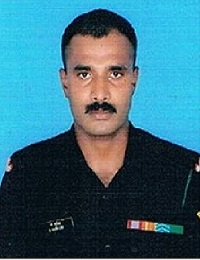 Lance Naik Sudheesh B belonged to 19 Madras of the Madras Regiment who also  served in Jammu and Kashmir in ‘Operation Rakshak’ . During his tenure, he was part of intelligence collection team of the Unit and had helped the Battalion carry out several operations successfully.He also served in ‘Operation Rhino’ in the North East and was part of the Quick Reaction Team of the Company. He also volunteered to serve in Rashtriya Rifles for two years.

A sportsman to the core, he is survived by wife Salumul P and  four-month-old daughter.

He was one of the ten soldiers who got buried under snow after their camp in the northern part of the Siachen glacier was hit by a major avalanche  in Feb 2016. The avalanche struck the camp located in the northern Siachen Glacier, at a height of 19,600 feet, in the early hours of 3rd Feb 2016 . The post was manned by a Junior Commissioned Officer and nine soldiers. The rescue operations were carried out by specialized teams of the Army and the Air Force which were being coordinated from Leh and Udhampur.

Soldiers face extreme risks in manning the inhospitable terrain at heights of 21,000 feet under extreme weather conditions on the world’s highest battlefield. Avalanches usually take place due to accumulation of snow and are triggered by morning sunlight. In other cases, when the slope of accumulated snow is between 60 to 80 degrees, the instability leads to an avalanche. Although the Army has a unit of the Snow Avalanche Study Establishment (SASE) in Jammu and Kashmir, with several observatories at various locations to issue warnings and alerts to the Army formations and units, it could not detect this avalanche and the cause also could not be known.