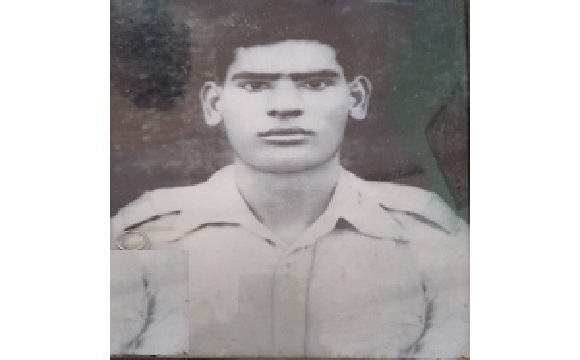 Lance Naik Sardar Singh was born on 12 May 1939 in Jasaur Kheri village of Jhajjar district in Haryana. After completing his initial education he joined the Army in the year 1956 at the age of 17 years. He was recruited into 4 Grenadiers of the Grenadiers, an infantry Regiment known for its brave soldiers and rich history of various battle honours.

During October 1962, Lance Naik Sardar Singh's unit 4 Grenadiers was deployed on the Eastern front in NEFA sector. The unit troops were deployed at a forward post near Nam Ka Chu river. After the Chinese incursion at Dhola post in Sep 1962 and subsequent developments, 4 Grenadiers battalion was ordered to withdraw from the forward post in NEFA. As a result a withdrawal plan was put into action and the troops were deployed to facilitate a safe withdrawal of men and material. Lance Naik Sardar Singh, second in command of a section was deployed on the extreme right flank of his company, that was responsible to ensure a safe withdrawal. The Chinese, approximately a company strong, had established themselves on the opposite bank of the Nam Ka Chu river and had cut the withdrawal route by dominating the track leading back to Hathung La Pass.

The citation for the ‘Vir Chakra’ awarded to him reads:-
On 20 October 1962, a battalion of Grenadiers was ordered to withdraw from a forward post in NEFA. Lance Naik Sardar Singh was second in command of a section which was deployed on the extreme right flank of his company. The Chinese, approximately a company strong, had established themselves on the opposite bank of the Nyamkachu River and had cut the withdrawal route by dominating the track leading back to Hathung La Pass. Lance Naik Sardar Singh's platoon was given the task of guarding the right flank of the battalion position so as to prevent enemy interference with the withdrawal. Being in the forward-most section, he ensured that the section kept on firing at the enemy. He remained in the position till the whole company had collected at the rendezvous. However, he himself fell a victim to an enemy bullet.
Lance Naik Sardar Singh displayed courage and devotion to the duty of a high order.