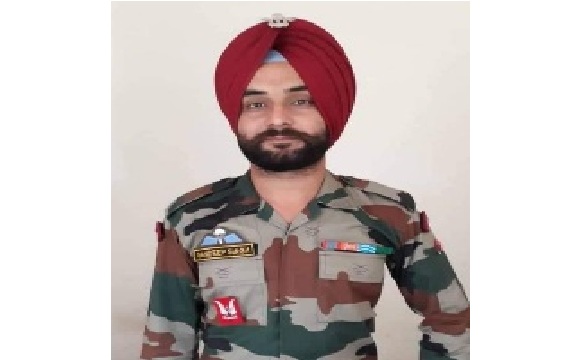 Lance Naik Sandeep Singh hailed from Chhotepur village of Gurdaspur district in Punjab.  Son of Shri Jagdev Singh and Smt Kulwinder Kaur, Lance Naik Sandeep had a brother Mandeep Singh and sister Ranjeet Kaur as his siblings. After completing his initial education he joined the Indian army in the year 2007 and was recruited into the Parachute Regiment, a regiment known for its gallant soldiers and daredevil operations. He was later inducted into the elite  4 Para ( Special Forces) battalion of the Parachute Regiment. Raised in 1961 and converted into a special force, 4 Para commandos are trained to be one of the toughest breed of soldiers in the Indian Army and perhaps in the world.

By 2018, Lance Naik Sandeep Singh had taken part in numerous covert and overt operations against the militants along with his comrades. He was also known to be part of the unit’s Ghatak (commando) team, which carried out surgical strikes on militants’ launch pads along the Line of Control in Pakistan in 2016. Two years late he again became part of another significant operation in the Kupwara district of J & K.

During 2018, Lance Naik Sandeep Singh’s unit was deployed in the Kupwara district of J & K for counterinsurgency operations. The Tangdhar sector of Kupwara was very volatile and was often used by the militants to infiltrate Indian territory. Consequently, the troops had to keep a very strict vigil and face challenging situations on a regular basis. There was another infiltration bid on 22nd Sept 2018 in that sector by the militants from across the border. The troops of 4 Para(SF) were deployed to deal with the infiltrators who noticed suspicious movement near the Eagle Post in the Gagadhri Nar area of the Tanghdar sector along the LOC. Lance Naik Sandeep Singh who was commanding the patrol team that spotted the militants immediately swung into action.

Lance Naik Sandeep Singh deployed his team tactically and moved further to ascertain the presence of militants. The militants on being challenged, opened fire at the troops, triggering a fierce gun battle. As the militants were heavily armed and were using the thick foliage of the area to hide, the operation continued for several hours and went on till 24th Sept. A total of five infiltrators were eliminated over a period of nearly two days. However, during the long-drawn operation, Lance Naik Sandeep Singh got hit by a barrage of bullets and was severely wounded. However despite being seriously injured he gunned down three militants in this operation before collapsing to the ground. He later succumbed to his injuries and attained martyrdom. Lance Naik Sandeep Singh was a gallant and committed soldier who laid down his life in the service of the nation. Lance Naik Sandeep Singh was awarded “Shaurya Chakra” (posthumously) for his commendable courage, bravery and supreme sacrifice.