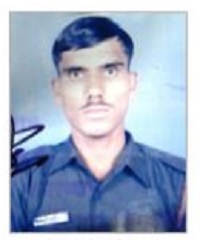 A soldier with the 6 Bihar regiment, Lance Naik RK Yadav (33) belonged to Balia village in Uttar Pradesh. He was among the 19 brave hearts who laid down their lives in the line of duty in September 2016 when Pakistani terrorists struck the Army’s Administrative base in Uri sector of J & K.

He is survived by his wife and three children.