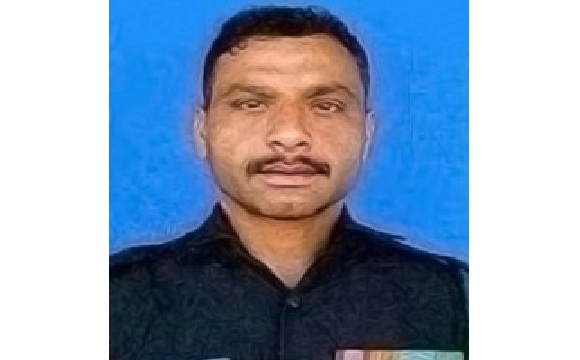 Lance Naik Ranjit Singh hailed from the Bhalwal village of Jammu district in Jammu and Kashmir. Son of an army veteran. he was fascinated with army life since his childhood. Consequently, following his dream, he joined the army after completing his schooling. He was recruited into the 3 JAK Rif battalion of the Jammu and Kashmir Rifles Regiment, an infantry Regiment known for its brave soldiers and rich history of various battle honours.

After completing his training, he served in varous operational areas and was serving in Jabalpur before being posted to J&K. By 2017, he had been promoted to the rank of Lance Naik and developed into a tough and devoted soldier. After serving for few years, L/Nk Ranjit Singh got married to Ms Neha and the couple had a daughter Kajal and son Kartik.

During 2017 L/Nk Ranjit Singh's unit 3 JAK LI was deployed in Keran Sector of Kupwara district in the Kashmir valley. The unit was deployed in the high-altitude areas along the LOC and was manning the forward posts along the border. Besides manning the posts, the troops launched regular armed patrols to monitor the area between the posts. The year 2017 continued with ceasefire violations by Pak forces like previous years violating the 2003 ceasefire agreement despite repeated calls for restraint and adherence to the pact during flag meetings between the two sides. In yet another case of ceasefire violation, Pakistani troops opened unprovoked fire in Keran sector of Kupwara district on 12 July 2017.

On 12 July 2017, Pakistan Army troops initiated unprovoked firing on Indian posts from across the border in Keran Sector of Kupwara district. During that period, L/Nk Ranjit Singh was manning one of the forward posts in the Furkiya area of Chowkibal in Keran sector along the Line of Control. The Pakistani forces used mortars and other weapons during the firing. Indian army responded in a befitting manner to the Pakistani aggression and consequently, a heavy exchange of fire ensued thereafter, which continued intermittently for several hours. However during the heavy exchange of fire, L/Nk Ranjit Singh and his comrade Rifleman Satish Bhagat received multiple splinter injuries. They were provided immediate medical aid and evacuated to the nearest military medical facility for treatment. But unfortunately L/Nk Ranjit Singh and his comrade Rifleman Satish Bhagat later succumbed to their injuries and were martyred.  L/Nk Ranjit Singh was a brave and dedicated soldier, who laid down his life in the line of his duty.