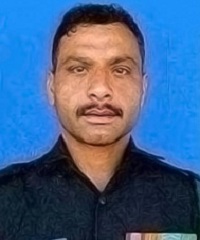 Lance Naik Ranjit Singh was born in  village Burn in Bhalwal area of Jammu and Kashmir. Following the tradition of the area he also joined Indian Army. He was serving  in 3 JAK Rif of India Army. On the fateful day of Wednesday Jul 12,2017 he was deployed at a forward post in Keran sector of J&K.

The Ceasefire Violation By Pakistan on 12 Jul, 2017

On July 12, 2017 violating  ceasefire  Pakistan Army unleashed terror on the Line of Control  and their snipers started targeting our soldiers. Lance Naik Ranjit Singh and one more soldier who were  deployed at Furkiya area of Chowkibal in Keran sector of Kupwara district  felled to this dastardly and unprovoked act. Both valiant soldiers who belonged to Jammu district  laid down their life safguarding the boundary of our nation and truly  lived up to the Indian Army’s highest standard of making sacrifice for our motherland.

Northern Army chief Lt Gen Devraj Anbu paid his respects to the two soldiers and offered condolences to their families.