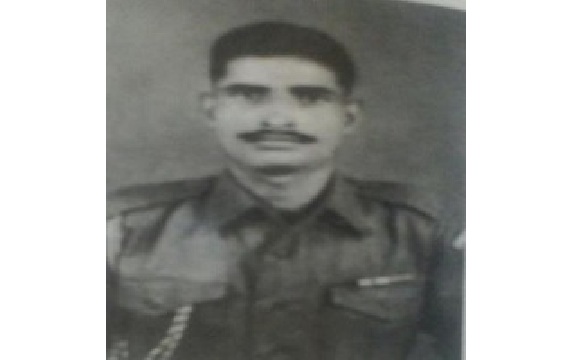 Place of birth : Ghazipur , UP

Lance Naik Ram Ugram Pandey hailed from village of Hema-Bansi in Ghazipur district of Uttar Pradesh and was born on 01st Jul 1942.  Son of Shri Harakh Nandan Pandey and Smt Samarth Devi, he joined the Indian Army on 31st Dec 1962 at the age of 20 years. He was enrolled into 8 Guards Battalion of the Brigade of the Guards, an infantry Regiment known for its gallant soldiers with a long history of numerous battle exploits.

By 1971, he had put in around 09 years of service and had been promoted to the rank of Lance Naik. By then he had served in various field areas and gained the field-craft skills required to be a battle-ready soldier.

During Nov 1971, Lance Naik Ram Ugram Pandey's unit was deployed in the eastern sector as the war became imminent. Though the 1971 war officially commenced on 03 Dec 1971 when Pak Air Force attacked our 11 Air Force bases, the border skirmishes and hostile actions by the enemy were happening much before that. on 23/24 Nov 1971, in response to an enemy hostile action, 8 Guards battalion was tasked to attack an enemy post. The attack was launched on 24 Nov 1971 and Lance Naik Pandey was part of the team that formed the attacking force. He was commanding a section of a company that spearheaded the attack.

Naik Pandey  and his comrades were held up by heavy and accurate fire from well-fortified enemy positions. Lance Naik Pandey leading an aggressive attack crawled up and destroyed in succession two enemy bunkers with hand grenades. He then took up a rocket launcher and destroyed a third bunker.  However while doing so, he received gun shots and was mortally wounded. He succumbed to his injuries and was martyred on the battle-field. Lance Naik Ram Ugram Pandey showed exemplary valour and leadership and made the supreme sacrifice. Lance Naik Ram Ugram Pandey was a fearless and committed soldier who laid down his life at the age of 29 years in the line of his duty.

The citation of the Maha Vir Chakra awarded to him reads :

Lance Naik R.U. Pandey was commanding a section of a company of a battalion of brigade of Guards in an attack on an enemy post on the Eastern Front. The assaulting troops were held up by heavy and accurate fire from well-fortified enemy positions. Lance Naik Pandey crawled up and destroyed in succession two enemy bunkers with hand grenades. He then took up a rocket launcher and destroyed a third bunker when he was mortally wounded and died on the spot. Lance Naik R.U. Pandey showed exemplary valour and leadership and made the supreme sacrifice.