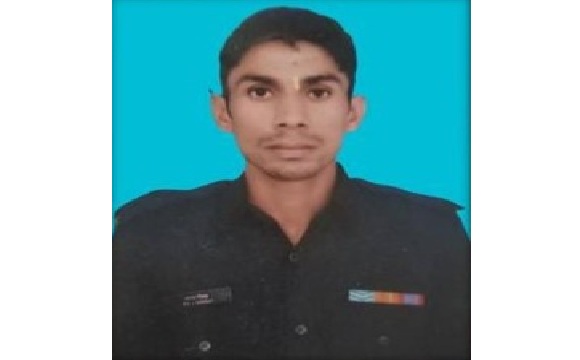 Lance Naik Raj Singh Khatana hailed from Damdama village in Gurugram district of Haryana. Son of an Army veteran Hav Gajaraj Singh and Smt Bimla Devi, L/Nk Raj Singh was the eldest of three brothers and two sisters. He joined the Army in after completing his schooling in the year 2011. He was recruited into 5 Rajput battalion of the Rajput Regiment, an infantry Regiment well known for its fearless soldiers.

After serving for few years, he got married to Ms Ravitha  and the couple had two sons Rishabh and Anurag and a daughter Ishika. By the year 2020, he had been promoted to the rank of Lance Naik and served in various operational areas with challenging working conditions. After serving for few years with his parent, unit he was deputed to serve with 10 Rashtriya Rifles battalion, deployed in J&K for counter-insurgency operations.

During May 2020, Lance Naik Raj Singh's unit 10 RR was deployed in Doda district of J&K. As a number of militants were active in the unit’s AOR(Area of Responsibility), the unit troops had to maintain a very high state of preparedness at all times and had to undertake operations at a short notice. Based on the information from the intelligence sources, about the presence of some hardcore militants in Tasnal village of Doda district, the security forces decided to launch a joint combing operation on 16/17 May 2020, comprising the elements of Army, CRPF and J&K Police. Lance Naik Raj Singh was part of the team from 10 RR that was assigned the task of this operation.