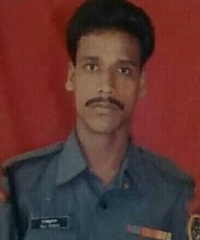 Lance Naik Raj Kumar Mahto was born on 9th Oct 1974 into a farmer’s family of Masu, a small village near Ranchi, Jharkhand (then Bihar). Son of Shri Babulal Mahto and Smt Devmani Devi, L Nk Raj Kumar had four other siblings with an elder brother and three younger sisters. Like most village households, the boys helped in the fields while the girls managed home with their mother and 2 of the 3 sisters were even married off at a very young age. However L Nk Raj Kumar was different from the rest and helped his youngest sister with her education and put his foot down against child marriage. Standing up against long standing ideologies especially in a village set up where the families were conservative, was very difficult but he stood his ground.

L Nk Raj Kumar finished his 10th grade from Govt. High School at BIT Mesra and went on to study further from Ram Lakhan College, Ranchi. An avid sportsman, he was a sprinter and an ace Footballer. While growing up at home, he helped the family at the fields, tended to the cattle and then rode down his cycle to college, 25 kms away. He grew up taking a lot of responsibility at the farms and yet did not loose sight of his passion for sports. He won many laurels in sports and made his village proud. He developed into a affable and caring person who was loved by one and all across the village fraternity. He eventually joined the Army at the age of 20 years in the year 1994. He was recruited into 12 Jat battalion of the Jat Regiment, an infantry Regiment well known for its intrepid soldiers and numerous battle honours.

After finishing his initial training, Sep Raj Kumar was posted to Binaguri as his first assignment. After serving for some time he got married to Ms Jaya Prabha, a girl belonging to Kurmi Mahto community from Tatisilwai near Ranchi on 20 May 1997. He was then posted to Siachen in 1998, and later was selected for the Commando Training at NSG ( National Security Guard ) in 1999. He went on to become a part of 52 SAG ( Special Action Group), the anti-hijacking unit of NSG and took part in various challenging operations. He served for 3 years with NSG before returning to his parent unit, 12 Jat in the year 2002. He joined his unit in Jaipur in 2002, but soon got deputed to serve with 5 RR battalion deployed in J&K for counter insurgency operations.

During June 2004, L Nk Raj Kumar was serving with 5 RR battalion deployed in Ganderbal district of J&K.  The unit troops were engaged in counter-insurgency operations on a regular basis as its AOR (Area of Responsibility) was affected by active militancy. The Malutgali hill and the nallah at the foothill falling under the AOR of the unit were invariably being used as infiltration route by the militants and it was a cause of worry for the unit. On 04 June 2004, the unit received information from the intelligence sources about the presence of two hardcore militants in Malutgali. It was decided to launch a search and cordon operation to nab the militants. L Nk Raj Kumar was part of the team headed by the Company Commander, that was tasked with the operation. L Nk Raj Kumar being a tough and trained commando was the linchpin of the assault team and the Company Commander too held him in high esteem.

L Nk Raj Kumar and his comrades reached the suspected area in Malutgali village of Ganderbal district and cordoned off the area. The troops surrounded the area from all sides to block the escape routes. The militants realized that they could not break the cordon and decided to wait and fight. It was decided that L Nk Raj Kumar would move in first with cover fire being provided by the Company Commander. The militants by then had moved to vantage points and waiting for an opportune moment. As L Nk Raj Kumar stepped forward to take position, he came under attack by the militants who fired at him with automatic weapons. L Nk Raj Kumar received multiple bullets and as a result collapsed on the ground.

The Company Commander and other soldiers rushed to the spot under cover fire to move L Nk Raj Kumar to safety. The militants taking advantage of the situation made an escape through the Malutgali nallah. Srinagar was about 25 Kms from the site and the time was critical for L Nk Raj Kumar. The Company Commander quickly made arrangements to rush L Nk Raj Kumar in an ambulance to 92 Base Hospital at Srinagar. However L Nk Raj Kumar later succumbed to his injuries on the way and was martyred. The two militants were eventually eliminated in another operation by 24 RR battalion on the next day. L Nk Raj Kumar was a valiant and committed soldier who laid down his life at the age of 29 years in the line of his duty.