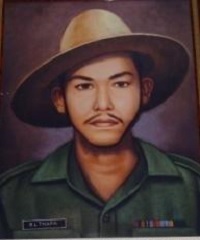 Lance Naik Rabi Lal Thapa was born on 6 November 1923, in Gumli Tehsil, Nepal. He joined the Indian army in 1940 at the age of seventeen and was recruited into 1/1 GR of 1 Gorkha Rifles Regiment, a Regiment known for its fearless soldiers and numerous battle exploits. Lance Naik Thapa after completing his training served in various operational areas including the Second World War. However he proved his mettle as a brave soldier in the Indo-Pak war of 1947-48.

During 1948, Lance Naik Thapa’s unit was deployed in J & K and was in thick of operations against the Pakistani forces. On 27 September, Lance Naik Thapa was sent as section commander of a patrol in the Bhed area in what was then Jammu & Kashmir. When India’s pickets came under heavy automatic gunfire from the enemy on three sides, this brave-heart grabbed a Bren gun and rushed forth. Single-handed, he engaged with the enemy, killing three of them. Taken by surprise by his unexpected action, the enemy withdrew, only to return with reinforcements. Realizing that his section could be cut off by the opposite side, he ordered his men to withdraw and stepped out to face the enemy alone and started firing. In a rare display of courage and daredevilry Lance Naik Thapa kept firing at the enemy forces till he could take the brunt of the enemy fire. He valiantly faced the barrage of bullets and was martyred.

Lance Naik Thapa’s gallant and selfless actions unnerved the enemy and ensured the safety of the men in his section . In recognition of his conspicuous bravery, unyielding fighting spirit and supreme sacrifice, Lance Naik Rabi Lal Thapa was given the nation’s second highest wartime gallantry award, “Maha Vir Chakra”.

On 27 Sept. 1948, Lance Naik Rabi Lal Thapa was section commander of a patrol, which was sent to Bhed to intercept enemy movements towards our pickets when the destination came under heavy enemy automatic fire from three directions. Lance Naik Thapa took the Bren gun, rushed forward alone, and engaged the enemy killing three of them. This quick action of his completely surprised the enemy and they fled in disorder. But the enemy returned much reinforced. Again realizing the danger to his section being cut off by the enemy, Lance Naik Thapa ordered his section to withdraw and alone left his post and rushed forward to engage the advancing enemy. He went on firing his sten gun till the enemy silenced him.

By his personal sacrifice, Lance Naik Thapa made possible for the rest of the patrol to get back safely. His courage, devotion to duty and most conspicuous gallantry throughout the action was of the highest order.