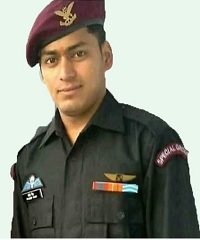 Lance Naik Pradeep Singh Rawat hailed from Bagi Bamund village in Chamba Block in Garhwal District of Uttarakhand.  Pradeep Singh Rawat was the only brother to his three younger sisters. L/Nk Pradeep Singh joined the army after completing his school education. He was recruited into 4 Gharwal battalion of the Gharwal Rifles Regiment, an infantry regiment well known for its gallant soldiers.

L/Nk Pradeep Singh Rawat got married in Jan 2017  and was  to visit his family  in next 4 months to celebrate his 2nd marriage anniversary.

During 2018, L/Nk Pradeep Singh Rawat’s unit was deployed in Baramulla district of J&K. The unit troops were manning the forward posts  in Uri sector along the LOC.  The area under the area of responsibility of the unit (AOC) was prone to infiltration by the terrorists from across the border. Thus the soldiers had to maintain strict vigil and operated regular patrols to thwart any attempt of infiltration. The patrols were also launched by the unit to monitor the gaps existing between various manned posts. L/Nk Pradeep Singh was part of one such patrol launched on 12th August 2018.

L/Nk Pradeep Singh Rawat is survived by his parents, wife and three sisters.