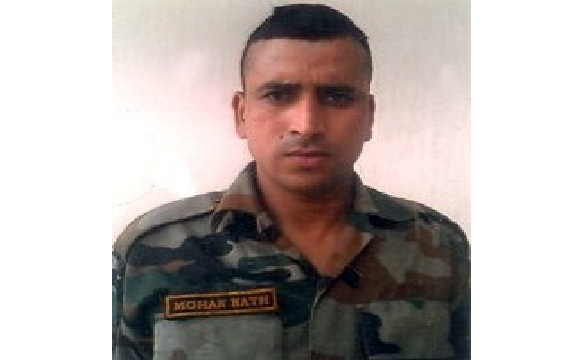 Lance Naik Mohan Nath Goswami hailed from Lalkuan village in Nainital district of Uttarakhand. Son of an Army veteran, L Nk Goswami always nursed the dream of joining the Army. In 2002, he had joined the 9th Battalion, of the Parachute Regiment, a special forces battalion known for its fearless soldiers and daredevil operations in most challenging conditions. Within short span of time, Lance Naik Goswami had earned the reputation of being one of the toughest men in the unit. Lance Naik Goswami volunteered for various operational missions undertaken by his unit and was a part of numerous successful counter-terrorism operations in Jammu and Kashmir.

He actively participated in three successful counter-insurgency operations in Kashmir in September 2015, within a span of 11 days. Among the countless stories of unparalleled courage in the Army the story of  L Nk Goswami is legendary. His saga of gallantry is regarded with awe and disbelief among his unit personnel.

On 21 Aug 2015, a Para(SF) squad under the leadership of Capt Dipesh Mehra was deployed to hunt terrorists in a remote village named Khurmur in Handwara district of J & K. As per intelligence reports 3 terrorists were expected to arrive at a designated spot to receive 6 more infiltrators. On the night of 22 Aug the squad spotted the infiltrators, who on being challenged fired at the troops. During the exchange of fire, Capt Mehra got injured. On getting this information L Nk Goswami who was at the 9 Para(SF) HQs at that time volunteered to rush to the rescue of Capt Mehra’s squad. L Nk Goswami joined the squad of Capt Mehra and helped the injured Capt out of the area. L Nk Goswami continued with the operation till the next day and consequently, all the infiltrators were eliminated making the operation code-named as “Op Khurmur” successful.

On 26 Aug 2015, information was received from intelligence sources that 5 terrorists had infiltrated in Uri sector. The troops of 35 RR who were deployed to tackle them managed to kill one terrorist on a remote ridge line on the Shamshabari range. The other four terrorists escaped under the cover of darkness. A drone was deployed by the Army to track the movements of fleeing terrorists. Also 12 commandos of 9 Para(SF) including L Nk Goswami were airdropped to take on the terrorists. The landing area was about 4 Kms away from the last known location of the terrorists. Eventually the drone guided the commandos to the cave where the terrorists were hiding. L Nk Goswami again leading from the front managed to kill 3 terrorists along with his comrades and captured on terrorist alive. Thus L Nk Goswami once again played a pivotal role in successfully completing the operation code-named as “Op Lidder Panzal”.

On 02 Sep 2015, the intelligence reports suggested that 6 infiltrators were on their way across the remote Sutsalyar forests of Kupwara, one of the densest jungles of Kashmir. The visibility through the foliage was never more than 3 meters making the task of the troops much more difficult. 6 squads of 36 men were deployed to take on the infiltrators in a planned operation of 96 hours. At 2030 hrs L Nk Goswami’s squad detected the terrorists in the suspected location, who fired at them on being challenged. In the first few minutes 1 of the 4 terrorists was hit by L Nk Goswami’s bullet but not killed.

The guns fell silent afterward as it began to rain. But shortly after midnight, the terrorists fired at the troops with the grenade launcher and injured L Nk Goswami’s two comrades. L Nk Goswami along with his buddy Hav Mahendra Singh moved towards the injured soldiers but as they did so, his buddy was hit by bullets from the terrorists paralyzing the lower half of the body. In order to save his buddy, L Nk Goswami sprang from his cover position firing furiously at the terrorists. But during the exchange of fire L Nk Goswami was hit by two bullets and he crumpled sideways with a roar. But L Nk Goswami killed the two advancing terrorists before crashing on the ground. L Nk Goswami was martyred setting a fine example of gallantry, unyielding fighting spirit and sacrifice.

Lance Naik Goswami displayed courage and patriotism that is seldom seen even in the bravest of men. He put his troops and their safety above his own and defended his country with his very last breath. His actions were the truest form of patriotism and his legacy will live on forever. For his bravery and enormous courage, he was given the nation’s highest peace time gallantry award, “Ashok Chakra” posthumously.

On the intervening night of 02/03 September 2015, Lance Naik Mohan Nath Goswami was part of an ambush in Haphruda forest at Kupwara district of Jammu and Kashmir. At about 20:15 hrs, there was a fierce encounter with four terrorists wherein two of his comrades were injured and pinned down. Lance Naik Mohan along with his buddy dashed forward to rescue their injured colleagues, knowing well the risk to his own life. He first assisted in eliminating one terrorist. Sensing grave danger to three of his wounded colleagues, Lance Naik Mohan with utter disregard to his own personal safety, charged at the remaining terrorists drawing intense fire from them. He was hit in the thigh. Unmindful, he closed in and eliminated one terrorist, injured another and was again shot in the abdomen. Undeterred by his injuries, he hurled himself on the last terrorist and killed him at point blank range before succumbing to his wounds. Lance Naik Mohan not only killed two terrorists, but also assisted in neutralizing the other two and save the lives of three of his wounded colleagues. Thus, Lance Naik Mohan Nath Goswami exhibited most conspicuous gallantry in personally eliminating two terrorists and assisting in evacuation of his wounded colleagues and made supreme sacrifice in the highest traditions of the Indian Army.