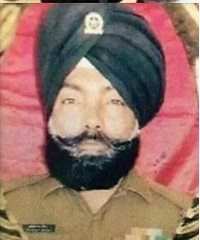 Hav Kulwant Singh hailed from Chak Sharif village in Gurdaspur district of Punjab.  He joined the army at the age of 19 years and retired in 2004. He later joined the Defence Service Corps in 2006 and served in various defence bases. In the later part of 2015, Hav Kulwant Singh got transferred to 1055 DSC Platoon based at Air Force Station Pathankot. His family was very happy about his transfer as this was the first time in his 30 years of service that he had got posted to a place near to his hometown in nearby Gurdaspur.

On the night 02 Jan 2016 at 0330 hr, five to six heavily armed terrorists entered the lines and opened indiscriminate fire on the troops.  Hav Kulwant Singh fought bravely but got wounded during the exchange of fire. He later succumbed to his injuries and was martyred. He was awarded with the gallantry award, “Sena Medal” for his courage, devotion to duty and supreme sacrifice. Hav Kulwant Singh is survived by his mother, wife and two sons.