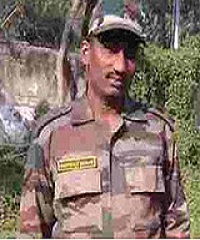 Lance Naik Kadam Sambhaji Yeshwantrao hailed from village Janapuri, in (Tehsil: Loha)  Nanded district of Maharashtra. The family owns a small farm in Janapuri.
Nagrota Army Base Attack : 29 Nov 2016
On the morning of 29 November 2016 at around 5:30 IST, three terrorists wearing police uniforms entered the base which housed nearly 1,000 soldiers just about 20 kilometres from Jammu. They attacked the Indian Army’s 166 Field Regiment unit in the town of Nagrota, near Jammu city. The toughest part of the counter-terror operation was in preventing a potential hostage crisis. The terrorists had entered a part of the complex where families of soldiers lived and then slipped into different rooms.That placed at risk at least four unarmed officers, the wives of two officers and two babies.   The process of extricating the women and children was extremely dangerous. The women used “household items” to block potential entry points in the living quarters. The militants divided themselves into two groups, entered the living quarters of the base and opened fire with AK-47s and grenades. In the resultant gun battle, all three militants were killed and the hostages were freed by the Indian Army.
However, during the fierce gun-battle Lance Naik Kadam got injured and later succumbed to his injuries. Lance Naik Kadam was martyred along with his six comrades in service of the nation in the highest traditions of the Army.
Lance Naik Kadam is survived by his wife Sheetal, daughter Tejaswini, father Yashwantrao, mother Lata, and two sisters.