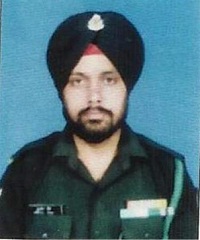 Lance Naik Gurmail Singh belonged to Makhanpur in Jammu district of J & K. Son of an Army veteran Natha Singh, Lance Naik Gurmail Singh always wanted to follow in the footsteps of his father and join the army. He followed his dream and was recruited into 24 Punjab of the famed Punjab Regiment known for numerous battle honours and its brave soldiers. Lance Naik Gurmail Singh was a keen sportsman and a very good volleyball player. He took part in a various unit and regiment level tournaments during his service.

During his service career, Lance Naik Gurmail served in various terrorist infested areas and also in UN Peace Keeping Force. During 2014, his unit was deployed in J & K area engaged in anti-insurgency operations.

On 05 December 2014, six terrorists attacked the army camp of 31 Field Regiment at Baramulla district of Jammu and Kashmir. It was a pre-dawn attack at around 3 AM intended to surprise the army and cause maximum casualties. The army camp was located about 12 Kms from Uri town. At 0545 hours, the Army launched a counter-operation to nab the terrorists under the leadership Lt Col Sankalp Kumar of 24 Punjab.

A gun battle ensued thereafter and eventually, all the terrorists were neutralized.  However, Lance Naik Gurmail Singh got severely injured during the operation and was martyred.