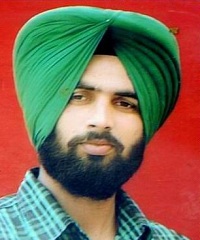 Lance Naik Gurdev Singh hailed from village Boparai Baj Singh, Punjab. He was son of Mr Mehar Singh. After completing his studies he joined the Indian Army and was inducted into the 5 Sikh. During 2015 he was serving in 6RR, a unit raised for counter insurgency, in Kupawara area, Jammu & Kashmir.

During 2015, Lance Naik Gurdev Singh unit was deployed in Kupwara district of J & K and was engaged in operations against the militants on a regular basis. On 4th Oct 2015, information was received by the security forces from the intelligence sources about the presence of some militants in dense Hafruda forests of Handwara, 85 km northwest of Srinagar. Consequently a joint operation was launched by the Army and J & K police to nab the militants. The Joint team comprising troops from 6 RR battalion of Army and J & K police  cordoned off the suspected area and spotted the militants. However the militants  taking advantage of the dense forest gave a slip to the security forces.

The militant group later scattered in vast Hafruda forests. The dense forests and thick undergrowth in the forest have made it a preferred hideout for militants over the years. But the troops continued to comb the area in search of militants, who found their escape routes blocked. As the search operation by the troops was underway, the militants hiding in strategical places opened fire at the column of troops. A  gun battle ensued thereafter with heavy exchange of fire. The militants were heavily armed with automatic weapons and were firing from positions of advantage under the cover of darkness and thick foliage. During the exchange of fire four soldiers of 6 RR including Lance Naik Gurdev Singh, Sepoy Surinder Singh, Lance Naik Botta Satyam and Sepoy Surendra got severely injured. They later succumbed to their injuries and were martyred.

Lance Naik Gurdev Singh was a valiant and dedicated soldier who laid down his life in the service of the nation. He is survived by his father Mehar Singh, Brother Major Singh and sister Gurinder Kaur,wife Rajbir Kaur and daughter Avneet and son Lakshdeep.