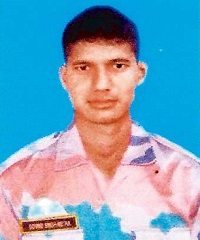 Lance Naik Govind Singh hailed from Uttarakhand and was born in a family of military background. He was the third member of his family to serve in the army, his father Pratap Singh and elder brother Mahendra Singh too served in the armed forces. He belonged to the elite 9 Parachute Regiment known for its bravery and daredevil operations.

In Oct 2015, the security forces had received information from intelligence sources that about 300 ultras were waiting near the border to sneak into the Kashmir valley. The suspicious movement was noticed along the LoC in Krishna Ghati sector. In response to these reports, an operation was launched drawing troops form 1st  Mahar and 9 Para units near the Tiba and Tilla posts.

On 13th October, the Army’s elite 9 Parachute Regiment launched the operation in the evening in Krishna Ghati sector on the LoC in Poonch sector. Lance Naik Govind was part of the team which had planned a series of at least six ambushes, bolstered by a larger area domination patrol by smaller units. The patrol went on the whole night, along with periodic checks on the ambush sites. One such ambush site was being monitored by the watchful eyes of Lance Naik Govind.

On 14th October, Lance Naik Govind’s team spotted some activity and on being challenged the infiltrators fired at the troops. In the ensuing gunfight, Lance Naik Govind and his comrades fought fiercely to eliminate the Pakistani terrorists, taking down no less than 5 terrorists. In the gun battle, however, Lance Naik Govind got struck by three enemy bullets, including one in the head, while trying to save a fellow comrade. By the end of the battle, he was grievously wounded but did not give up. He was taken to a nearby medical institute from where he was airlifted to a military hospital in Udhampur, but he succumbed to his injuries and was martyred.

But the supreme sacrifice of Lance Naik Govind did not go in vain. The infiltration attempt by the militants was successfully foiled by the commandos and the area was totally sanitized. For his exceptional valor and self-sacrifice, Lance Naik Govind was recommended for the award of Sena medal.