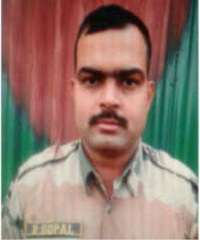 He joined the Army in the year 2003 and was recruited into the Corps of Signals, an important arm that provides communication to Indian army during war and peace. By 2017,Lance Naik Gopal Singh had served for 14 years in various operational areas in different parts of the country. He was part of NSG commando group tasked to clear the Taj hotel of terrorists in the 26/11 terror attacks in Mumbai. During the 26/11 terror attacks in 2008 while flushing out terrorists from Taj hotel of terrorists Lance Naik Gopal Singh had carried an injured Subedar Major out of the hotel in the face of heavy firing by terrorists and taken him to the ambulance. For this act of bravery in extremely hostile conditions, he was awarded the prestigious “Vishisht Seva Medal”.

on 12 Feb 2017, credible information was received from the intelligence sources about the presence of terrorists in Frisal village in Kulgam district. Based on the information a decision was taken by the security forces to launch a joint operation by  Ist-Rashtriya Rifles, Jammu and Kashmir police and the 18th battalion of Central Reserve Police Force (CRPF). The joint team swung into action and a cordon was thrown around Nagbal village in Frisal, about 70 km south of Srinagar at around 4.30 am. The intelligence input was clear that militants were hiding in a house in the village following which a cordon was thrown around the locality. On being spotted by the troops, who were accompanied by the house owner, militants fired at the troops.

A heavy gun battle ensued which carried on throughout the night of 12 Feb 2107 for over 10 hours. The assault team then decided to storm the house to flush out the militants. Lance Naik Gopal Singh Bhadoria and Sepoy Raghubeer Singh as leading pair of the team stormed the house and attacked the militants. However, during the heavy exchange of fire Lance Naik Gopal Singh Bhadoria got seriously injured and later succumbed to his injuries.  It was an act of raw courage and indomitable spirit coupled with a patriotic fervor that defined Lance Naik Gopal Singh Bhadoria and Sepoy Raghubeer Singh during the operation. Caring little for their own safety, the two brave-hearts set a new standard of valour when they stormed the house to take on the highly entrenched militants before laying down their lives in the line of duty.

In the 26/11 terror Attacks in Mumbai in the year 2008. Lance Naik Gopal singh Bhadoriya had carried an injured Subedar Major out of the hotel in the face of heavy firing by terrorists and took him to the ambulance. For this act of bravery, he was awarded with the “Vishisht Seva Medal”.