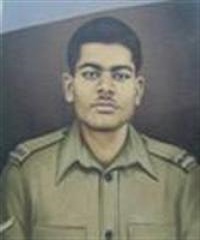 Place of birth : Naugma,, UP

Lance Naik Drig Pal Singh Rathore hailed from Naugma village in Shahjahanpur district of Uttar Pradesh. Son of Shri Sunder  Singh Rathore, he was born on 23 December 1945 and had two brothers as his siblings. Lance Naik Drig Pal Singh joined the Army after completing his schooling on 23 December 1965 at the age of 20 years. He was recruited into the 15 Rajput of the Rajput Regiment, an infantry Regiment well known for its fearless soldiers and various battle honours. By 1971, he had completed around 6 years of service and had taken part in various field operations.

During 1971, Lance Naik Drig Pal Singh's unit 15 Rajput got deployed on the western border in Punjab. As war broke out with Pakistan on the 3rd of December, 1971, the Pakistani army entered some 7 kilometers deep into Indian territory through the Sulemanki border, overcoming the resistance put up by our troops in the village of Beriwala, Gurmi Khera and Pakka, near Fazilka town of Punjab. In order to stop the advance of the enemy, Indian Army launched the counter offensive with 15 Rajput along with 4 Jat and 3 Assam battalions.

Lance Naik  Drig Pal Singh was commanding a section of a battalion of the Rajput Regiment during an attack on an enemy post on the Western Front. After the capture of the objective by the battalion, two enemy medium machine guns from pill boxes were still interfering with the reorganization and inflicting casualties on our troops. Realizing    the  importance of silencing these guns. Lance Naik Drig Pal Singh took two other ranks with him and with utter disregard for his life and safety crawled 200 yards up to the first bunker and silenced the Medium Machine Gun by lobbing a grenade . He then started crawling to the next bunker but, in the process received a burst from the machine gun on his left shoulder. Although bleeding profusely, he crawled to within six feet of the second bunker and was about to lob a grenade when he received a second burst of automatic fire on his chest killing him on the spot. His daring act however made the enemy to abandon the second bunker , leaving the machine gun and a large quantity of ammunition.

In this action Lance Naik Drig Pal Singh displayed outstanding courage and determination and made the supreme sacrifice in keeping with the highest tradition of the Army.