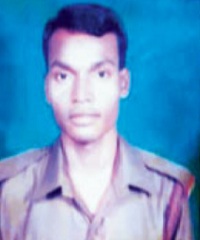 Lance Naik Bihari Marandi hailed from Ramnathpur village in Pakur district of Jharkhand. Son of Shri Baban Maradi, L/Nk Marandi had three brothers and three sisters. His two elder brothers were serving with CISF. L/Nk Marandi joined the Indian Army in 2001, at the very young age of about 17 years. He was recruited into 21 Bihar of the Bihar Regiment, an infantry regiment well known for its gallant soldiers.

By 2017,  Lance Naik Bihari Marandi had put in 16 years of service operating in various areas with different terrain and operating conditions. During 2017, L/Nk Marandi was serving in J & K area where his unit was deployed along the LoC.

During 2017, L/Nk Marandi ’s unit 21 Bihar was deployed in the Batalik sector of Ladakh region of Jammu & Kashmir. During the first week, of Apr 2017, a western disturbance over J & K triggered heavy rainfall and snow for over three days. This caused swelling of rivers and inundation of vast areas in J&K. The heavy snowfall also triggered multiple avalanches in J&K and one such avalanche struck the Batalik sector on 7th Apr 2017. The soldiers of 21 Bihar were manning the forward posts in the sector on that day. The horrific avalanche in Batalik sector hit one such army post and trapped five soldiers of 21 Bihar battalion. L/Nk Marandi was one of the five soldiers who got trapped under tons of snow.

The army pressed in the specialized avalanche rescue teams and equipment that continued the rescue operation despite hostile weather conditions. The team worked throughout the night in inhospitable weather and 15 feet snow and managed to rescue two soldiers. However, L/Nk Bihari Marandi, Sep Lakra, and Hav Prabhu Kirke could not be saved.  L/Nk Bihari Marandi was a brave and committed soldier who had laid down his life in the service of the motherland.