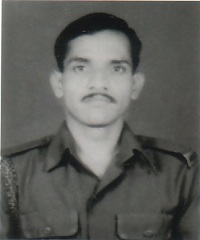 Lance Naik Bharmana Shinde was born on 01st March 1963 at Mannur district of Karnataka. Son of an Agriculturist, Lance Naik Bharmana had a dream of joining the Army and worked hard to achieve his goal. The other factor that weighed on his mind was the difficulty faced by his father to run the family on his meager income. Lance Naik Bharmana realized his father’s situation very early and decided to take the responsibility of running the family.

Consequently, Lance Naik Bharmana joined the Army on 26th October 1983 and got enrolled in the Regiment of Artillery. After four years of service in the Army, Lance Naik Bharmana got married to Leela in 1987 and the couple had two children named Smitha (Daughter) and son Teerthraj. Lance Naik Bharmana during his service career spanning over 11 years served in various operational areas and evolved into a professionally competent and committed soldier.

During 1995, Lance Naik Bharmana’s unit was deployed in  J & K and was engaged in anti-insurgency operations. On 07 July 1995, the unit had received credible information from the intelligence sources about the presence of militants in their area of responsibility. After analyzing the intelligence inputs it was decided to launch a search and destroy operation to deal with the militants.